The 3-5-2, or the '5-3-2 WB' as Football Manager 2020 calls it due to its defensive shape, is a great formation both in attack and in defense. However, it is really difficult to master, and could quickly turn into a disaster if not implemented properly. Jonathan Wilson describes the history of the 3-5-2 in his brilliant article in the Guardian

It was desperation that drove Bilardo to experiment on a tour of Europe in 1984. He had won only three of his first 15 games in charge, and his position was under threat. So low had his reputation sunk that when he read out the team to face Switzerland, journalists assumed he had made a mistake. "They told me I was wrong, that I'd named three central defenders," he said. "But I told them I was not confused. We were going to use three defenders, five midfielders and two forwards. We had practised it for two years, and now I was going to put it into practice in tough games." Switzerland were beaten 2-0, as were Belgium, and then Argentina won 3-1 against West Germany. Bilardo then retreated from the 3-5-2 – perhaps to shield his new formation from spying eyes, or perhaps because he had no grand plan but was constantly tinkering – until it came to the World Cup quarter-final against England two years later. He dropped the centre-forward Pedro Pasculli, who had scored in the previous round against Uruguay, instead deploying the midfielder Héctor Enrique as part of a central trio with Jorge Burruchaga and Sergio Batista. "You can't play against the English with a pure centre-forward," he explained. "They'd devour him, and the extra man in midfield will give Maradona more room." His playmaker, in other words, became a second striker as the shape shifted from 4-3-1-2 to 3-5-2 (or perhaps, more precisely, 3-5-1-1).

The 5-3-2 is easily my second favourite football formation, some way behind of my favourite, the 4-4-2/4-4-1-1. I have decided to restructure my 'Flying Scotsmen' Hearts team to a 3-5-2 after the initial, and successful, 4-4-2 didn't allow me play with ultra attacking wingbacks which I love.

Here is a guide on what to keep in mind and expect while fielding a 3-5-2 formation.

A word of note, this is MY way of playing a 3-5-2, and not THE way of playing it. Also this is not a downloadable plug-and-play super/exploitative tactic that guarantees you x number of goals or trophies. Instead, this article is intended to share my view on the formation and how I like to play it and how to balance a proper tactic based on these views accordingly.

Another thing is that I have been adjusting my team in terms of training and transfers for 3 seasons to reach this level of fluidity. In addition to the tactical tweaks I make during the game to counter specific threats. This applies to any tactic, so please take this into account if you are going to implement a similar tactic.

Before creating any tactic, I first decide how I want my team to play. It is all a matter of compromise and a balance of risk and reward. For me, the main aspects of the 3-5-2 are a lot like Conte's brilliant Inter side. These main points can be summarized as follows:

With this in mind, lets move on the formation and play style. 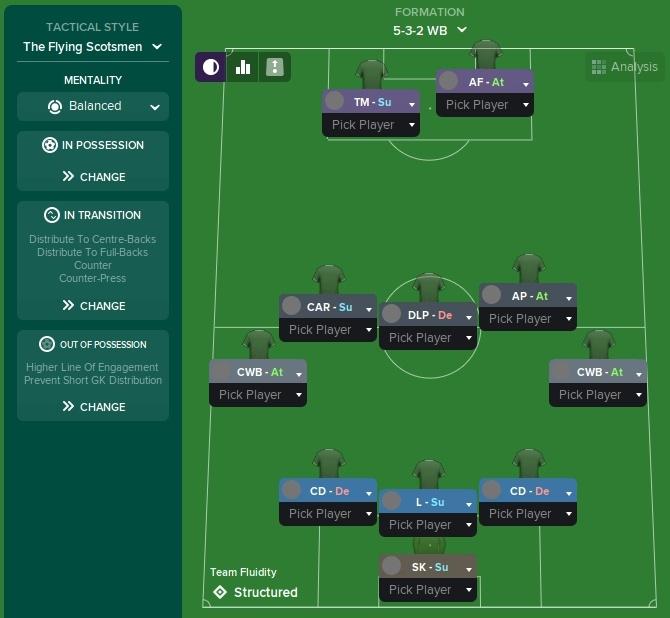 This is how I have set my Hearts side to play. Beautiful, isn't it? The back six roles are typically unchanged, unless I change the CWBs to a more conservative role late in a game to protect a lead. The same can be said of the strike partnership too.

The real beauty of the formation is the three central midfielders. You can easily make them more attacking, possession based or defensive by changing a couple of roles. The trio in the above screenshot is the defensive one, and the trio I being most matches with. Other combinations I use are:

The reason I use two playmakers in the centre is that I don't want us to be one dimensional. If I only had the DLP on, plays would usually be funneled through him, and to the wingbacks. The Advanced Playmaker, on the other hand, gives us another dimension in attack with his direct running and creative passing.

The carrilero is a very important role in the formation. I look for a ball winning midfielder sort of player in this role, who covers the left flank and stays wider to stop balls in behind the LWB. With some off the ball movement and long shots, he also chips in with a few screamers every now and then.

I opted for a limited number of team instructions to implement what I need exactly, and allow tinkering during the games.The thinking behind each of the TIs are as follows:

The following is an opening goal against Mourinho's Roma side in the UCL group stages. 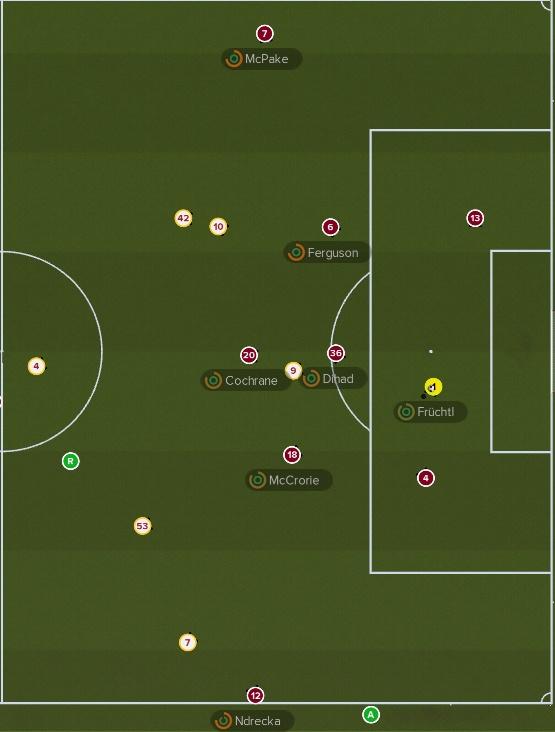 The ball was held by Fruchtl, following a save. He starts by playing the ball to Souttar our CB. The Libero (Dihad) and the 3 central mids combine to form a very strong diamond that is very hard to press against. The wingbacks start very wide, stretching the play and losing their markers.

Souttar plays it to the Libero, who quickly lays it to Cochrane, the DLP. He sprays the ball wide to the RWB (Josh McPake), who dribbles and roam from his position to score a lovely goal.

The following is an opening goal against Sporting CP in the UCL group stages. 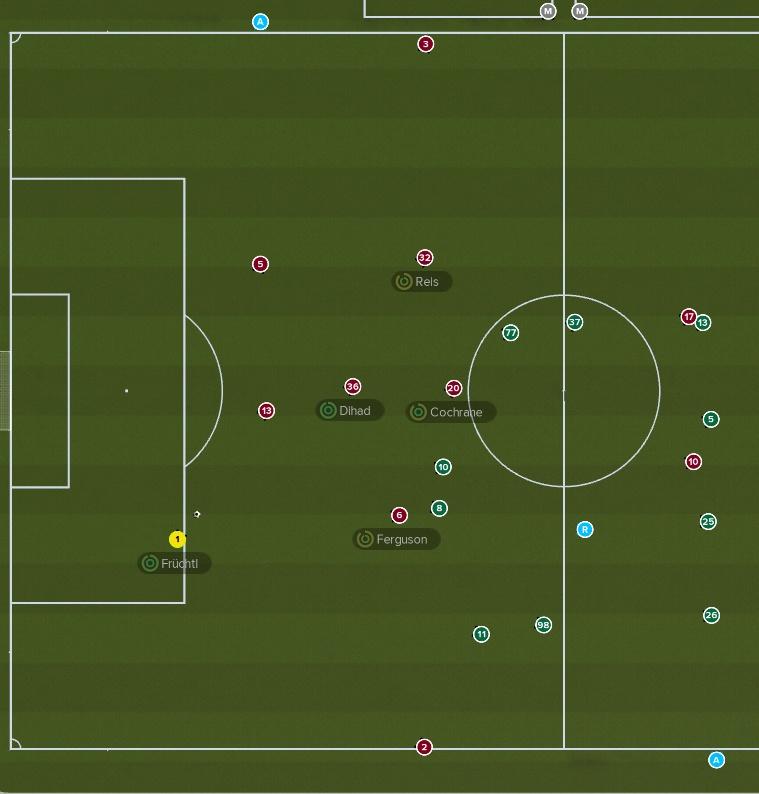 The same diamond appear during this goalkick, along with the wide positioning of the wingbacks. The goal is quite similar to the one above. The ball is played to the CB to goes to the Carrilero (Reis), who passes to Cochrane (DLP). Cochrane plays his favourite long diagonal pass to the LWB, who puts a sweet cross to the AP (Ferguson), whose attack duty makes him quite aggressive in both his off the ball and on the ball running, who finishes the move sweetly.

The following is the winning goal against the now third best team in Scotland (after Hearts and Celtic) in the cup. The goal is quite similar to the above, which is a recurring pattern of play that I like. The ball is played from the GK which quickly reaches the DLP who plays the LWB. The LWB dribbles and crosses for Wesely the Target Man (c) who lays it to McRorie, to blaze it home past his brother.

Cochrane and Wesley, the Target Man, are very crucial in our play. Cochrane had 7 key passes, and Wesley had 4 during this game. 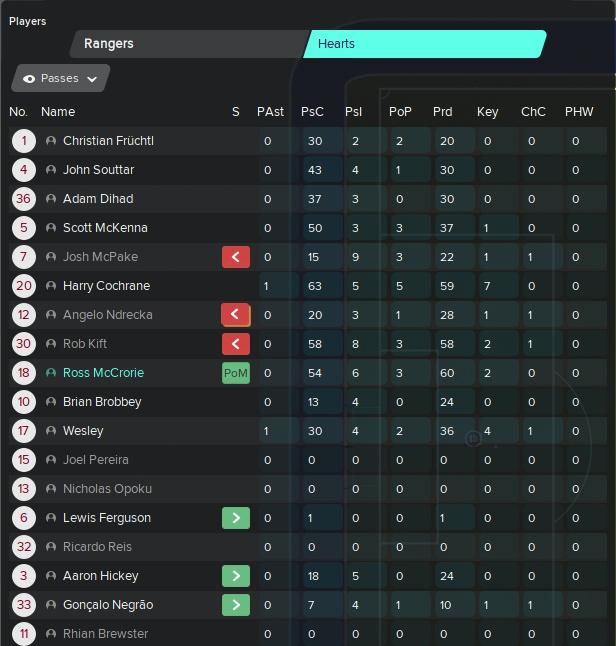 Finally, I leave you with some stats from my Hearts save, which I have been using this formation for two seasons now. 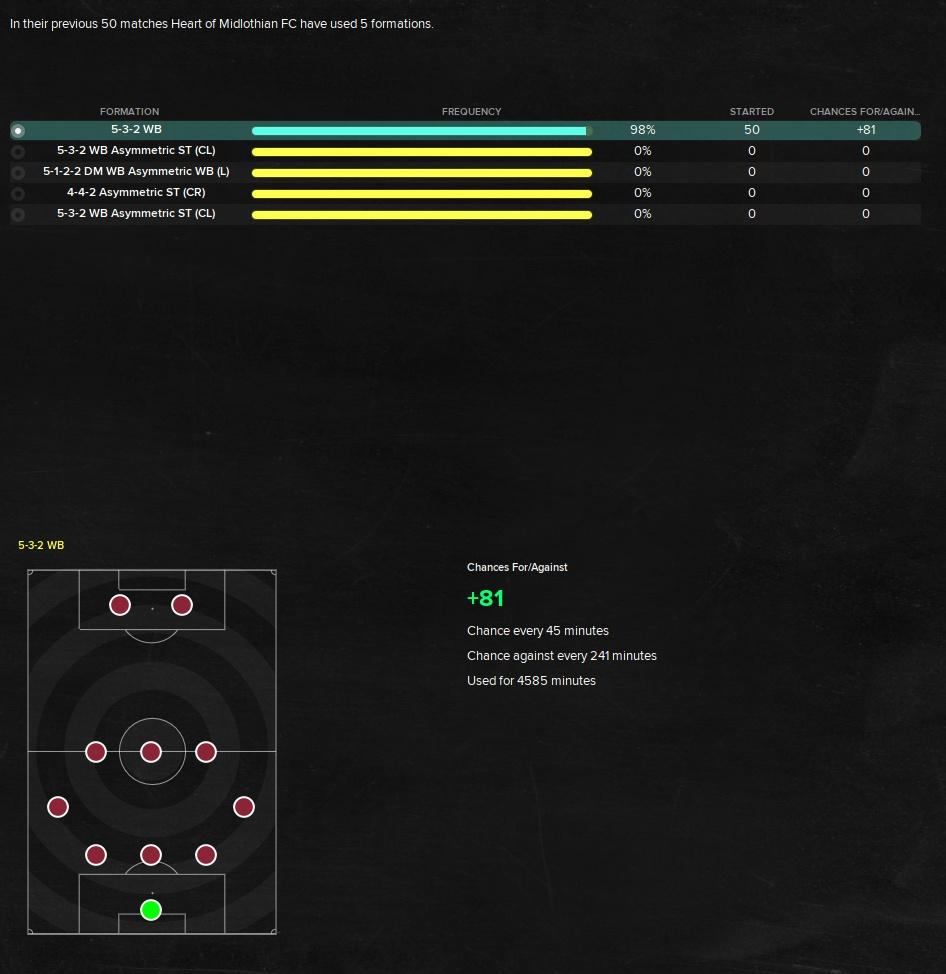 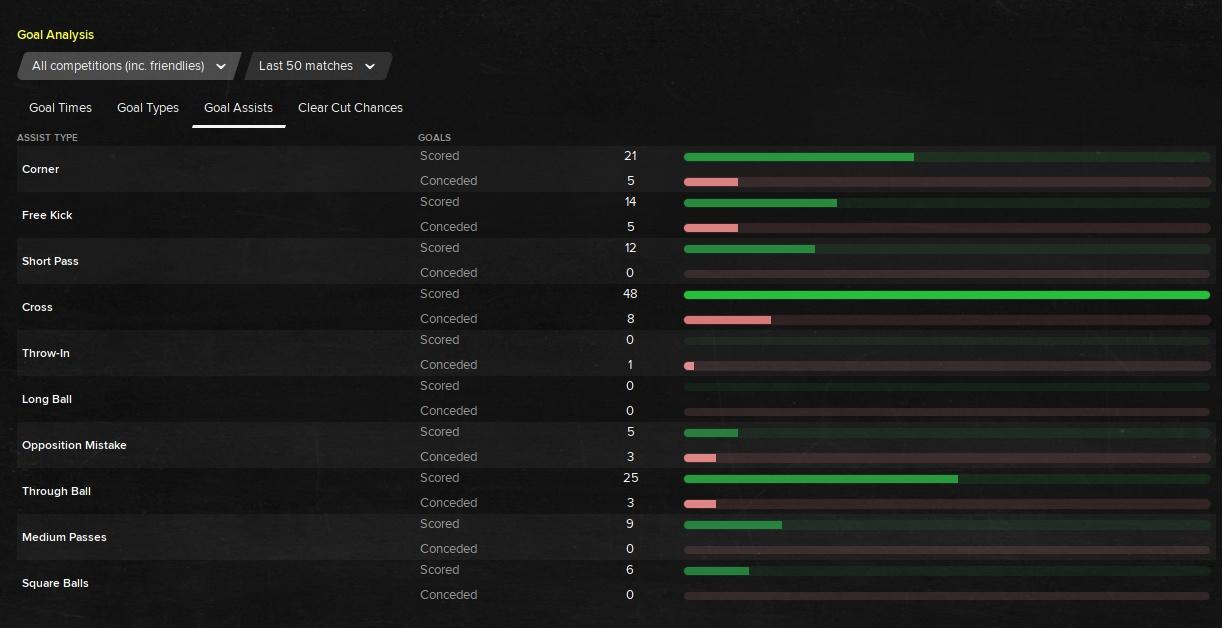 I am quite happy with how we are playing, scoring and assisting. It is only a matter of proper training, recruitment and managing the tactic during the game as the events unfold.

The beauty of FM is that it is a quite excellent simulation of football, one that allows you to affect the outcome of games with your tactical intervention during the game. Naturally, playing against a deep defensive side, won't be like playing against Liverpool or City. Similarly, when chasing a game you shouldn't play like you are protecting a lead.

As shown above, I have started the last 50 matches with the same formation, and generally with the same roles too. Watching games on extended or comprehensive highlights allows me to get a good view of what is happening in the game. My changes are usually substitutes, mentality changes or minor role changes.

Different players play out the same role differently, so a playmaker style of player will perform different in the AF role than a quick poacher for example. In this way, I can affect some ways. For example, against deep teams, I usually play a Target Man style of player in the AF role, to give us more physical presence against the opponent's defence.

Mentality has always been a big issue for me. It is not until soon that I realized that it is all about risk and reward, and the urgency of pressing and attacking movement. I started changing mentality during several games to avoid counterattack, or chase a game. Against defensive, deep weaker opponents, I usually go on Cautious mentality to avoid taking unnecessary risks that could turn into a counterattacking opportunity against us.

The opposite is also true, I may go positive against attacking sides to exploit the spaces they leave behind them.

This is all for now, if you try this tactic out, please share your ideas and thoughts in the comments below.