In the last part, I have discussed a long-ball 4-4-2 tactic that is inspired by Sean Dyche's Burnley. I had some good success in the Championship, and managed to get some good results in the Premier League.

However, these results were inconsistent, and we get very passive off the ball. These issues prevent the tactic from being a long term one that can be used regularly en-route to success.

Fueled by some enlightening discussion on the forums, I decided to improve and tweak the tactic to a direct long ball tactic that can be used consistently and successfully.

Basically, the main issues discussed were:

While these points are in line with the original plan, they required a complete makeover to fix. The solutions for the these 3 issues were:

The tactic now looks as follows: 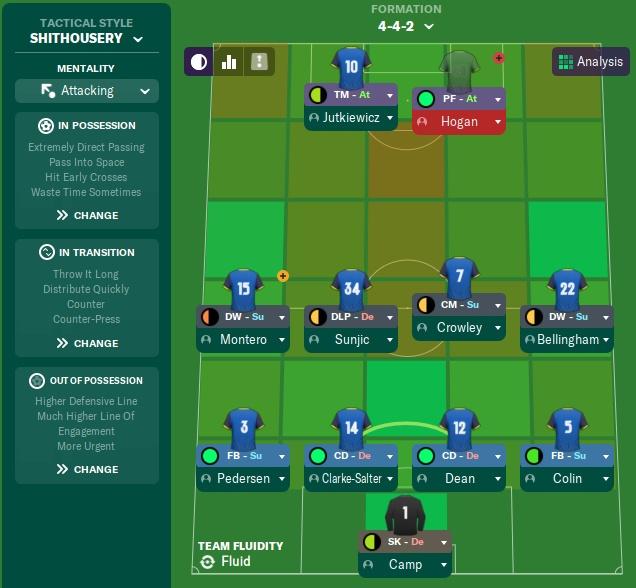 I used this in a new Birmingham save, with no first transfer window and the team was trained in the preseason to play a 4-4-2 with much more direct passing.

In a period of 7 games, we had a great 5 wins and 2 draws after the said tweaks. We managed to nick points off Leeds and Fulham, while scoring 15, conceding 6. Our target man, Jutkiewicz, had 7 goal involvements in this period, scoring 4 and laying off a further 3.

More importantly is our attacking play. Our attacking movements are superb and really good to watch. We we lose the ball, we apply aggressive pressure to get it back, and make it difficult for the opponents to play through us. The two forwards lurk forward, wrecking havoc each time they win a long ball, creating a chance for us as they combine with the hardworking supporting midfielders:

I like how the tactics plays out now. I look forward to continuing to develop this style and tailor the transfer strategy to recruit tall, strong, quick and determined individuals to make the best shithousing team around, especially after we are at the promised land, the Premier League.