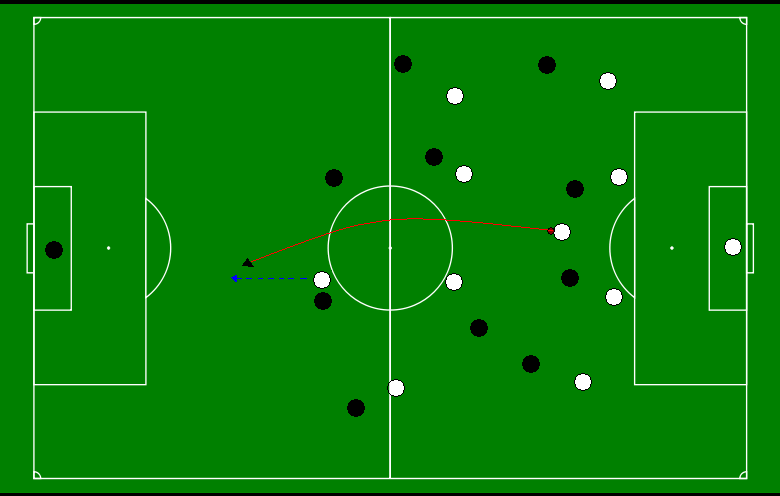 "We tried everything to win the game, but it's difficult playing a team who has two chances, score two goals, but didn't want to play the game. For me, the authority on the pitch is the referee, and when he is not there to try to check what he has to do on the pitch, it's difficult. They were trying to time waste from the first minute of the first half, and then it was anti-football so it's difficult to play against." - David Luiz after Chelsea's 2-2 draw against Burnley, 2019.

Burnley had 24% of the ball, and in Luiz's words, 2 chances and two goals. Chelsea had 22 shots that game, but were incredibly frustrated by Burnley organized and well drilled team.

I have never been a fan of tiki-taka, positional play and similar hipster terms of "the right way" to play football. I prefer direct, attacking, wide oriented teams that are solid defensively. My 3-5-2/5-3-2 is incredibly successful, playing sweet direct football with flying complete wingbacks.. However, six seasons in the game I was getting bored, and wanted to try something more cynical, and more "anti-football". Inspired by the best team in the world Liverpool Burnley, and their 4-4-2, I started a new save and set out to create my anti-football tactic. Long ball and anti-football tactics can be one of the best playstyles on Football Manager 2020 if done correctly.

To try this long ball and direct playstyle, I started a new save with Millwall. The choice was easy, they are the only team in the championship that has "Play Direct Football" in the club vision, and they actually chant about no one liking them, plus they have an excellent Jed Wallace in the squad. With that said, they are a perfect team for shithousery.

First and foremost, I would like to emphasize that my view of anti-football is a bit different than its common usage. I don't want my team to be besieged in its box, doing countless blocks and interceptions, while kicking the ball aimlessly to a striker. That kind of play won't get you anywhere as it could never be consistent, and would leave you handicapped if you concede. Instead, I envisage my team to:

To measure the success of our style, I decided to measure our success based on:

Only one formation comes into mind when planning long ball tactics: four four bloody two!. My only options were 352 and the 442 which use two central strikers, I favoured the 442 for being more balanced and covers the pitch more evenly than the 352, and thus fits lesser teams more than the 352. 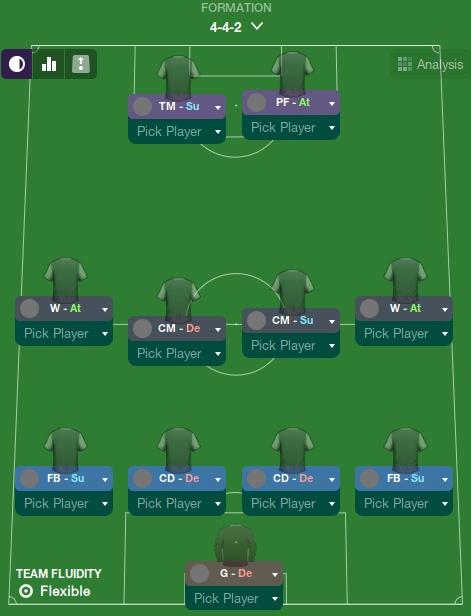 Quite basic formation. The back four is a simple defense first four. The midfield is comprised of two non-fancy hardworking duo that focus on winning the ball back and support attack. The wingers are tasked to dribble wide and cross the ball to the supporting target man and the pressing forward.

I like to design tactics that are flexible and can change with a simple mentality change, plus allowing me to fix issues by adding or removing a TI. Having every option ticked is usually a recipe for disaster, unless you know exactly what you are doing.

In my "shithousery" tactic, I have used the TIs required to create the playstyle outlined above as follows:

I had tinkered a lot with my Millwall team until I reached the style I am satisfied of. We were initially predicted to finish in the 19th position in the Championship, but now we are 2nd in mid February. 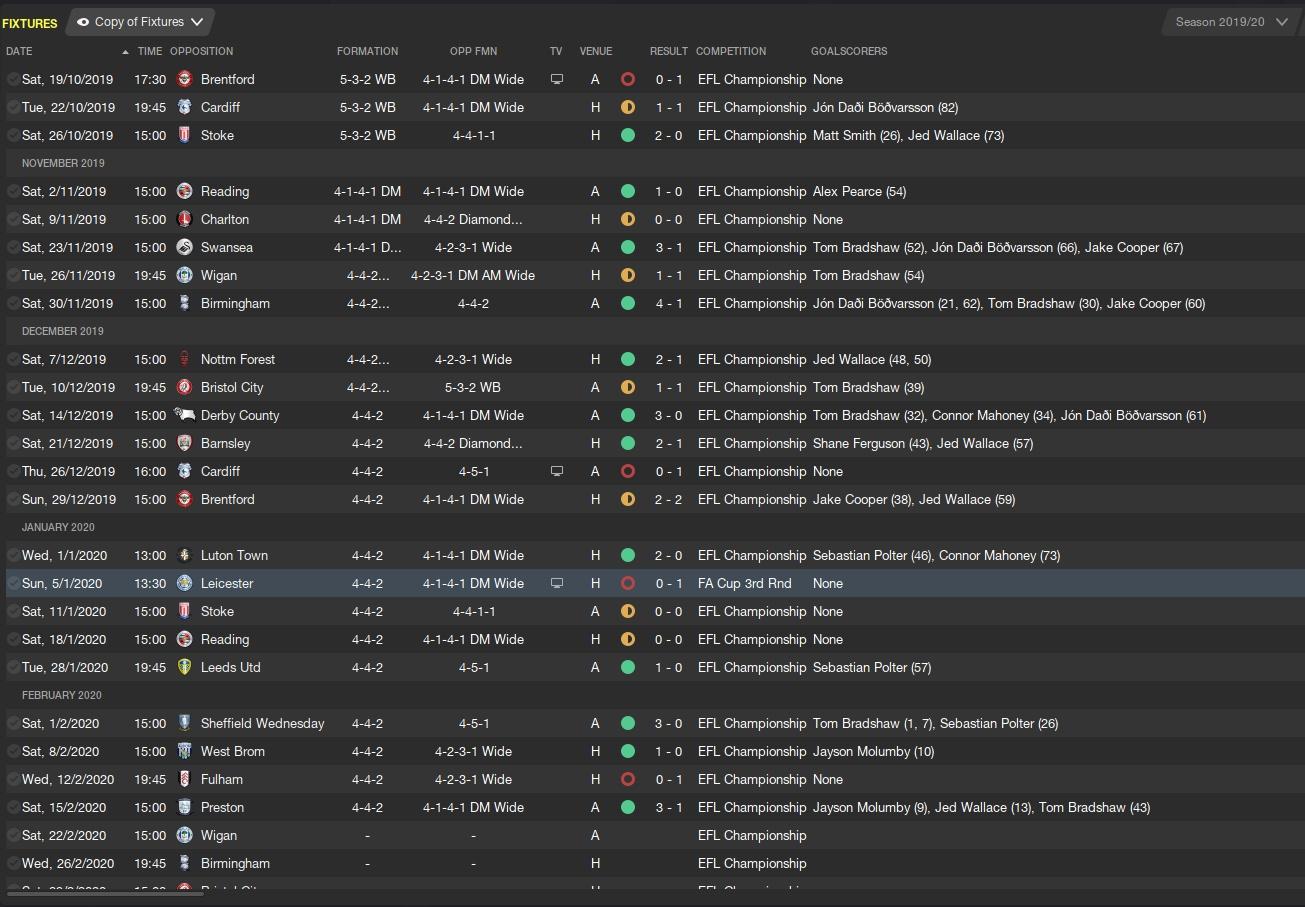 I have used this tactic starting from Wigan's game. 9 wins, 5 draws and 3 losses in a run of 17 games is a great result. More importantly, we are playing absolutely ugly football that I love. Most of the goals conceded would not be if I had better players, and we could have scored loads more if my strikers were better. Here is a sample of the goals scored:

This is the only goal from the away victory against the best team of the league, Leeds Utd. Here we can see the intent of the CM-S (Moulmby) as soon as he receives the ball and have some options up front. He swerves a sweet cross to Polter, our TM to head home.

This was one of our best victories and performances to date, we trounced a strong Derby team at their own backyard.

Once again, the lower risk forward thinking intent is clear in the team, the GK and the midfielders look to punt it upfield at any available opportunity. The second goal shows how dangerous we can be against teams that press high with a high defensive line.

Another superb goal against Barnsely. We managed to nick the ball as they pass around the ball, boringly, and pass around for a while until the forwards are in position, to unleash a strong long ball that gets us a goal.

Anyways, using the SPIs outlined above, lets see how well we are doing. Firstly, to put things into context, since the beginning of the season I have been tinkering a lot with the formations and TIs, but maintaining the same style, so that shouldn't affect the numbers a lot, but still maybe skewed slightly.

The numbers speak for themselves, we are ruthlessly efficient, using the ball well and taking our chances: 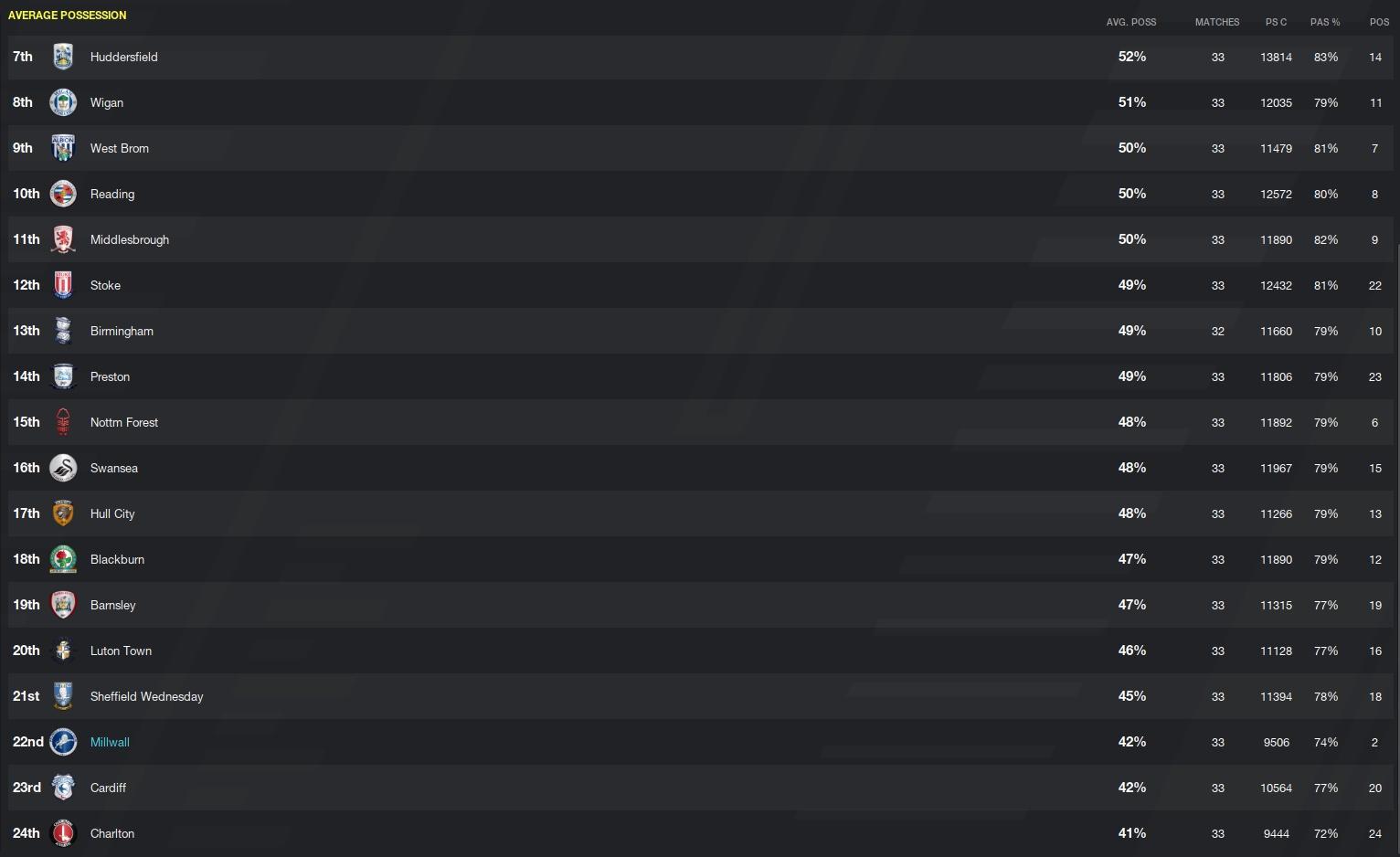 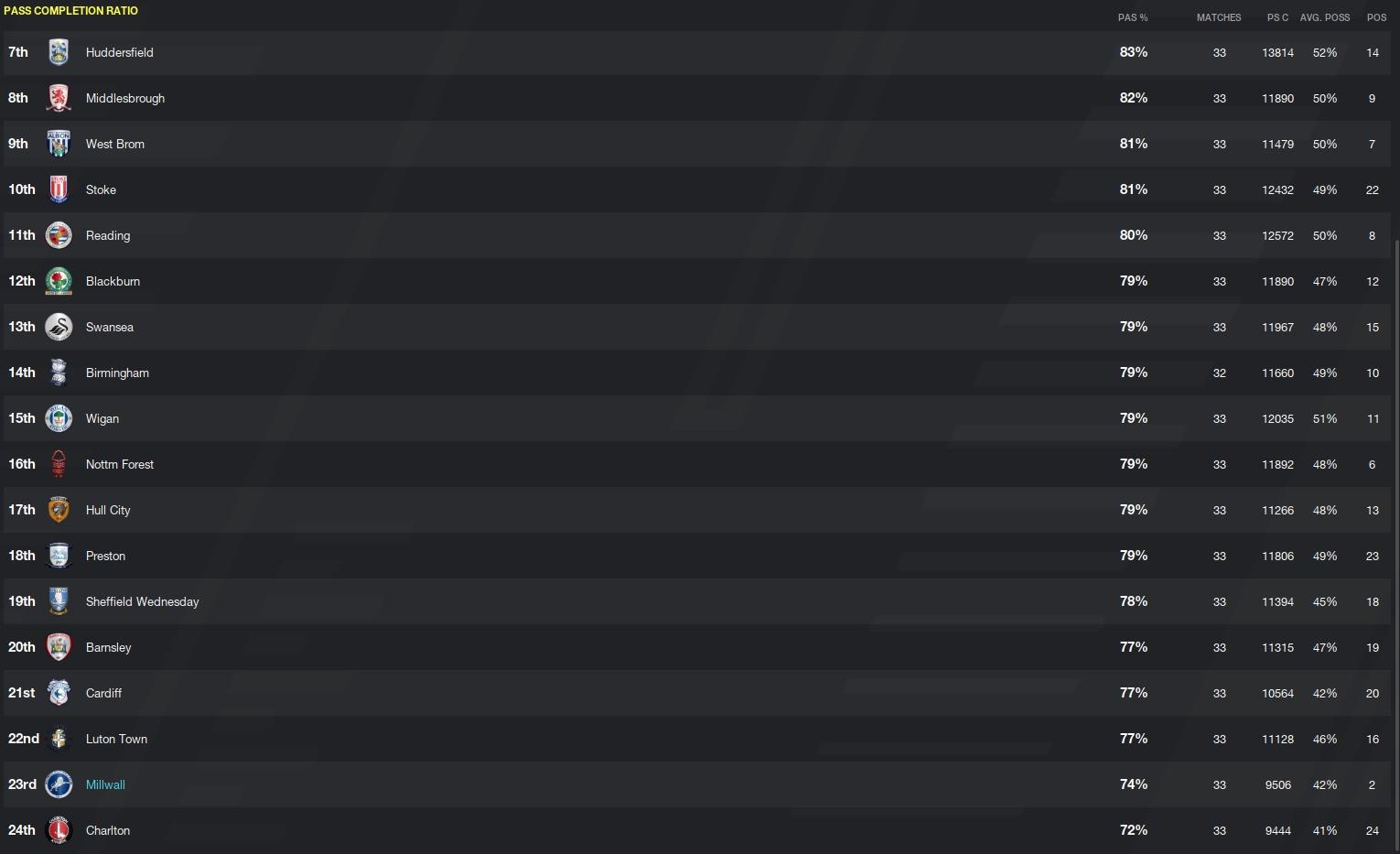 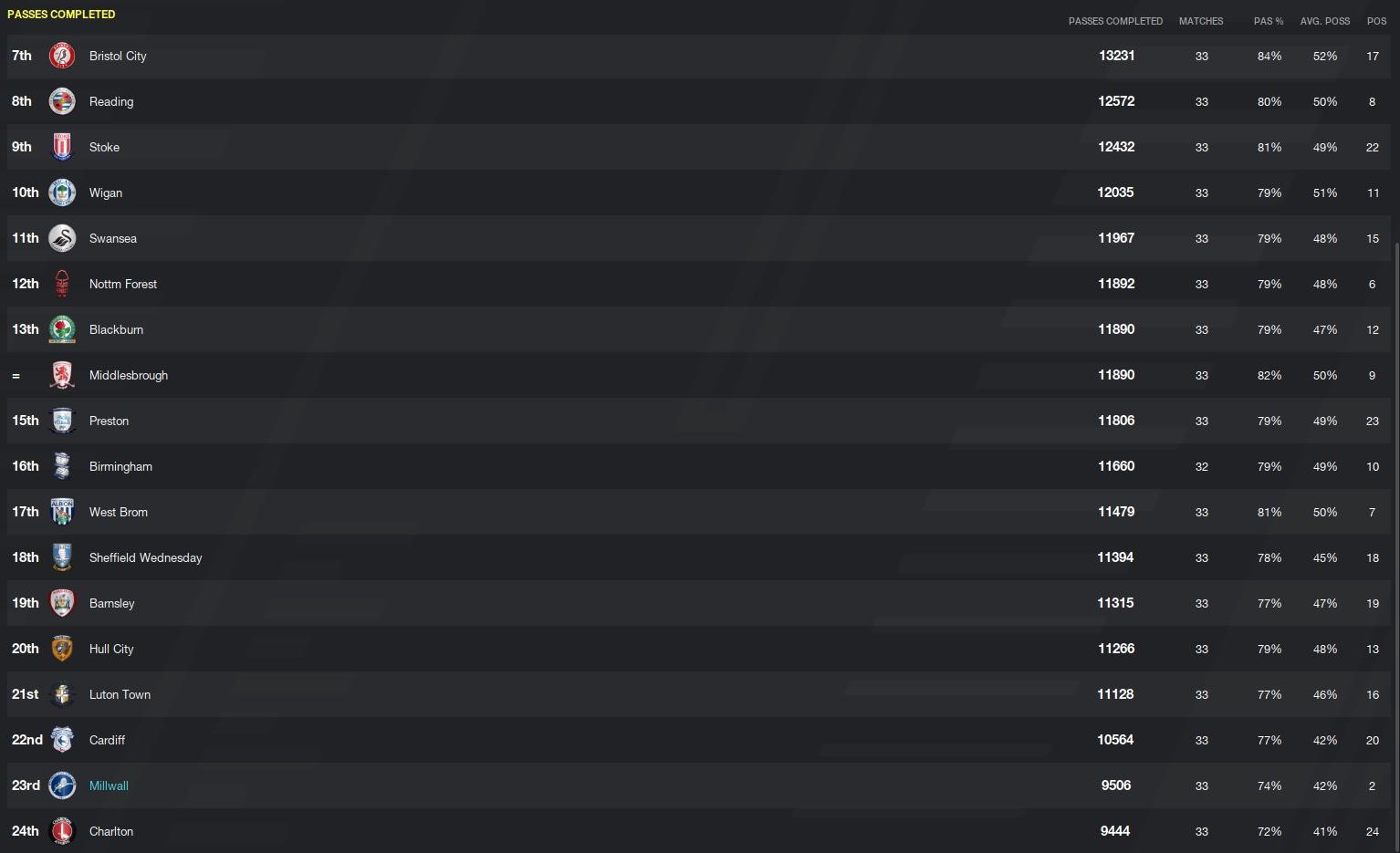 After getting our backsides handed over to us in the premier league, and our weakness were exposed dramatically, I had to make a couple of changes while remaining true to the shithousery that got us promoted.

My TM-S and PF-A combo are supposed to be a big man-small man duo. However, I was getting frustrated getting the ball lumped to the PF-A instead to the TM-S. This is probably caused by the "Much More Direct Passes" shout and the PF-A is the furthest available pass at any given time.

My solution was to use TM-A and let the small man be the PF-S. I have never used a TM-A to lead the line, but I had some solace watching Conte use Lukaku ahead of Lautauro in his Inter side.

The results were immense, we are MUCH more clinical going forward -especially against attacking teams-, while the TM works much better in attack than on support, flicking passes to his partner and the winger. I also dabbled a lot with the pressing instructions to find a sweet spot between passive and high pressing. This is my current formation and instructions: 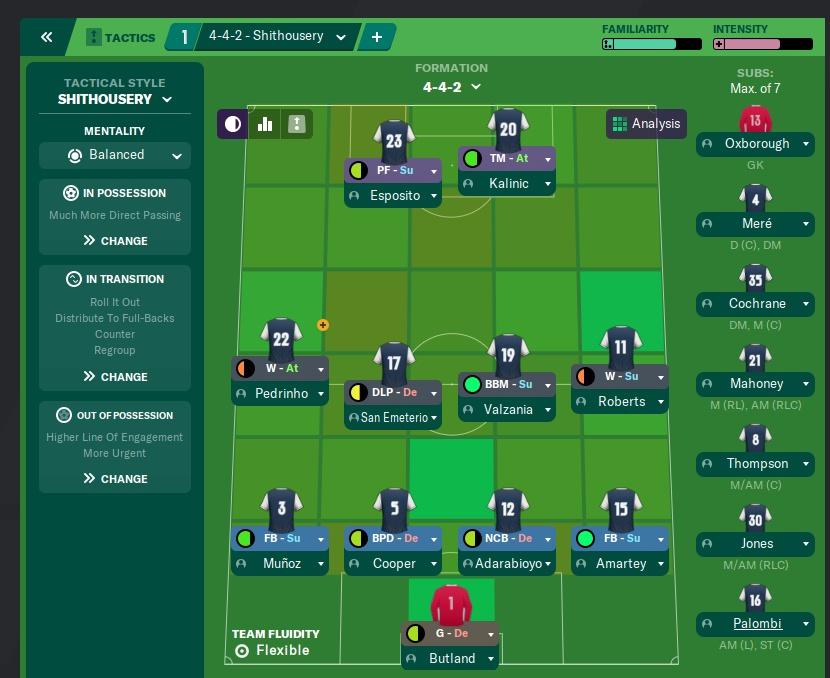 Play the game early and get access to the beta AND cheaper from Steam. Buy through fmdirect and get an exclusive 10% discount, and instant access when the beta arrives.

All you have to do is enter the code "FMDIRECT" during checkout for the additional discount.

Please note that this is an affiliate link, that may earn us some commission if you buy through us, AT NO extra costs to you whatsoever. The price you get is 10% less than the steam price.

Purchases are through 2Game, an authorized SEGA reseller.