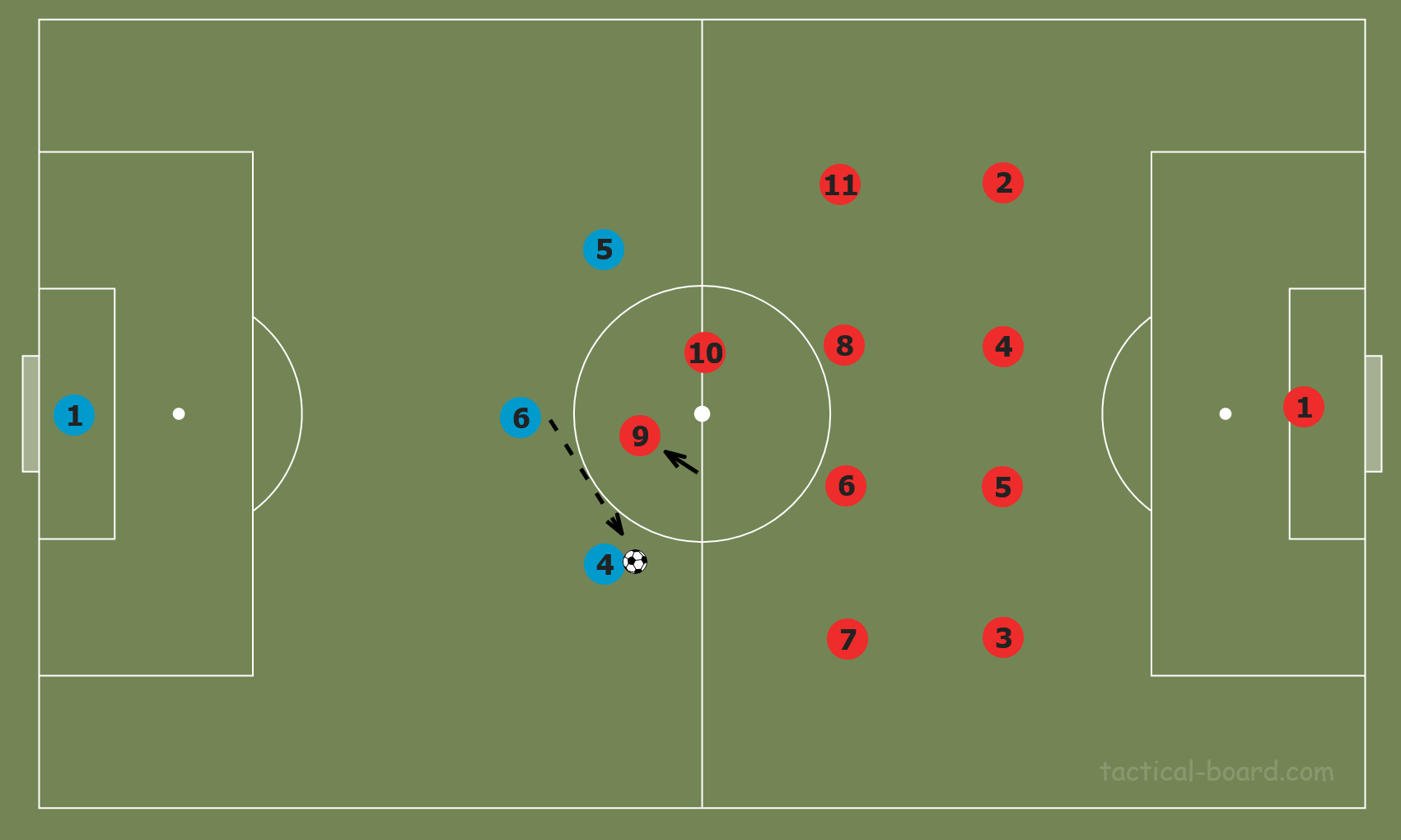 Welcome to the fourth part of this series of articles aimed at simplifying and explaining the process of creating Football Manager tactics, using the latest instalment of the hit series, Football Manager 2021.

This fourth article will build upon my thoughts about my direct attacking style, and how to translate this to maintain success on Football Manager.

While this post might not be an actual guide, I decided to include it with the guides series since it involves thinking out and designing a sustainable and successful playstyle.

Update: You can download the tactic from here. However, please note that this is not by any means a plug and play tactic that exploits the match engine and guarantees you lots of wins and goals.

It was never going to work in the top level, I should have realized that earlier. While we blitzed teams that over commit players in attack, they gradually started to play more cautiously against us, marking our forwards properly out of the game, and outnumbering our midfield. The finale of season one and the first half of season two was not as glorious as early game.

Monaco came knocking just before the winter transfer window of the second season. We were doing okay at Arminia, and Monaco were abysmal, and needed someone to save their season. It was a perfect chance for me to continue my save, and further improve my tactic.

I won't talk much about my first half season at Monaco. It was more of a testing ground for tactics, as I had lots of second thought about how I should proceed, especially that my 4-4-2 with two out and out strikers seemed to be unsuitable at higher level. We finally managed a 3rd place finish, winning the cup in the process, mainly using a deep 4-2-3-1 as that seemed the best option for the current players.

To be completely honest, I wanted to build the squad for a deep 4-2-3-1 for the third season, but after some games, I decided that I will remain true to my original style, which got me so far in the first place. However, it was obvious I shouldn't use the route one approach which was very one-dimensional and started to look out of place at higher levels. In short, I saw the following problems in my deep 4-4-2:

Therefore, I wanted to tweak the 4-4-2 to be better suited to better teams at higher levels. To remedy the above 3 points these were the changes I made:

With these changes, I looked to offer variety of attacking options, and at the same time, I retained the direct, quick, cross based approach that was so prominent in the original formation. 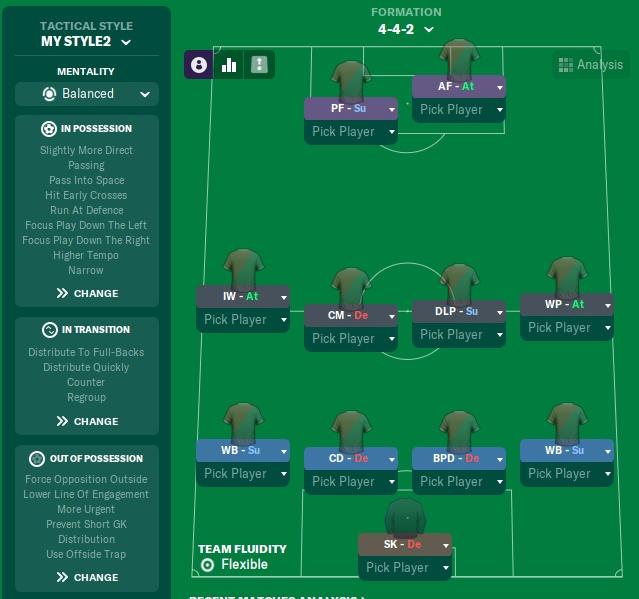 It is quite similar to the original one. As noted above the DL and LOE, along with Regroup, are all situational shouts that are used to counter specific threats. Against lower teams, I use the mid-block, with Counter press on. Against better teams, I tend to sit deeper and use Regroup. Of course, this is not all set in stone, but that's the main idea I tend to do.

For this game I started with a low block (Low LOE, Standard DL and Regroup - Balanced Mentality) 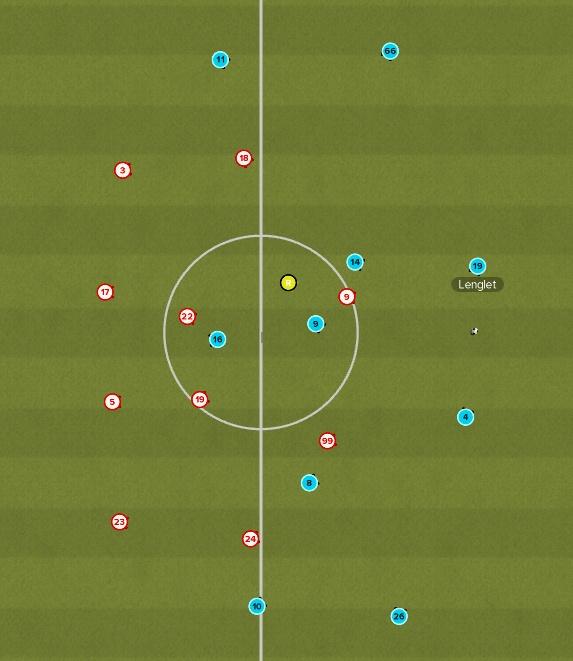 Our defensive shape is so much better, with the strikers a bit deeper. Lenglet plays the ball to Virgil, while our stirkers cuts off the passing lanes to Henderson and Keita (#14 and #8). Our strikers press the CBs, and Keita opens to receive a pass from Virgil, but is pressed by Zaniolo (# 24) 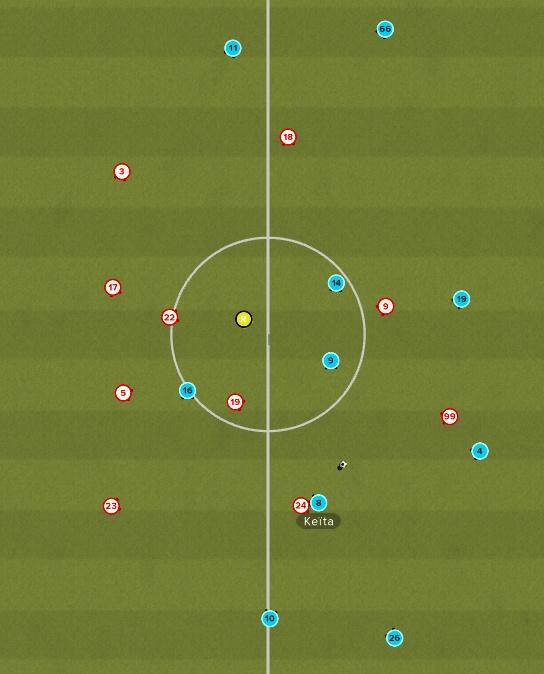 Zaniolo manages to nick the ball off Keita and dribbles, laying the ball to Milik to score from a nice move. 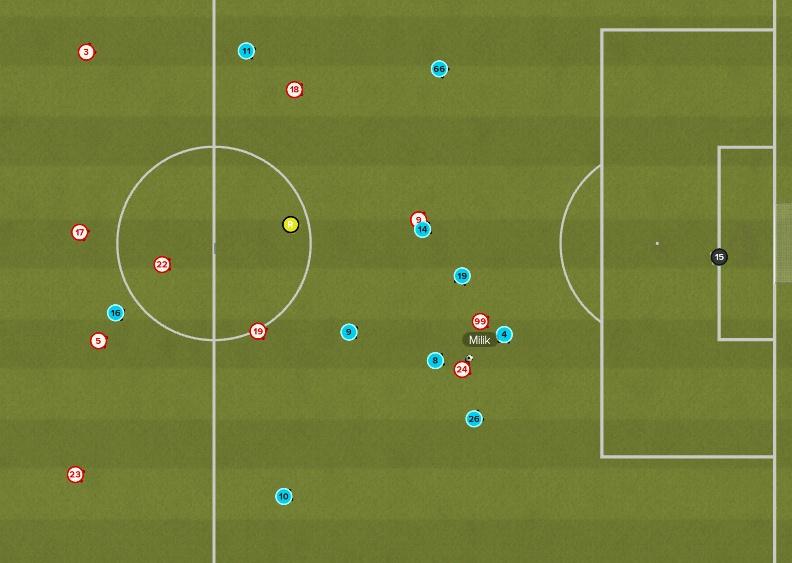 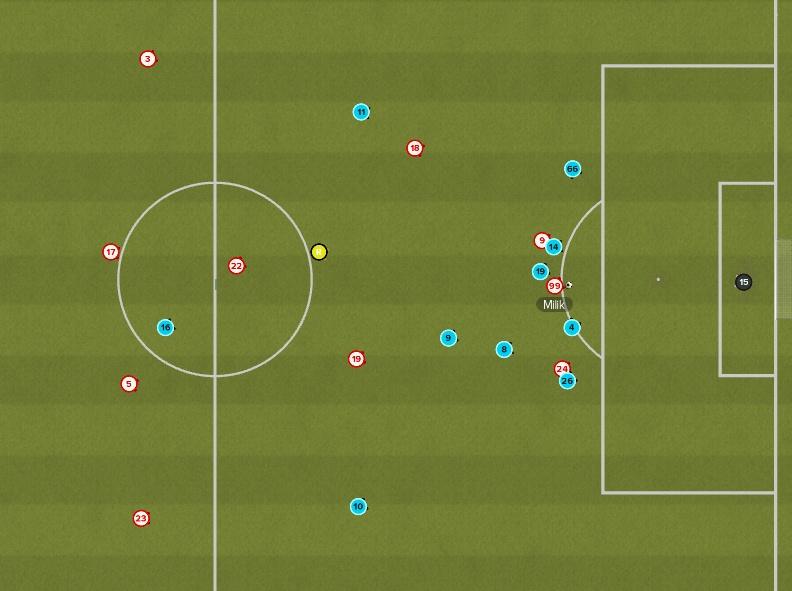 A real long ball style in which Allardyce would be proud of:

Some goals from games against weaker teams in the league shows how lethal we can be on the break, with our strikers pressing particularly well and winning the ball in the second one: # 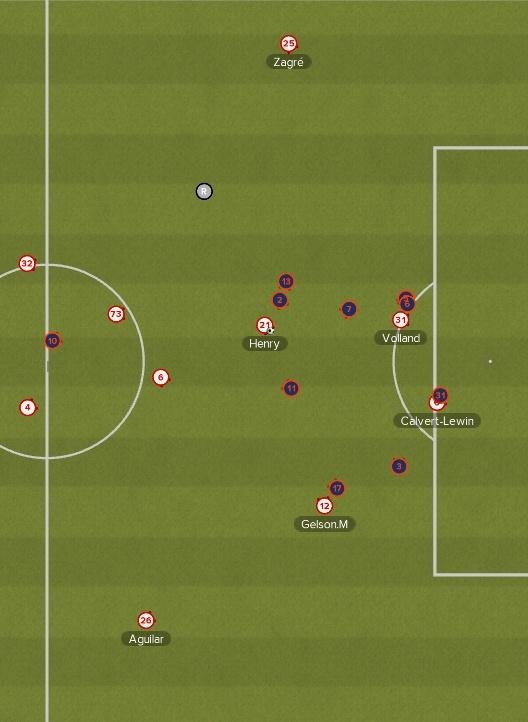 Our wingers (Henry and Gelson) are tucked deep inside, forcing the opponent to be narrow, and opening lots of spaces for our wingbacks. Our four forwards could then combine together to create all sorts of overloads in the center, while our wingbacks could rampage forward and pick their passes or cross.

So far, since using this final version of the tactic, this has been our results:

Finally, I feel that the tactic is finally complete and is sustainable for the long term, of course using the right players. Generally, I look for the following:

GK: A typical GK, with good distribution (kicking and throwing).

CB: Tall, physical, good in the air and not too slow defenders and with good mental attributes. Passing is a bonus, but not a requirement.

FB: Hardworking, good all round players, that are good on the ball, defensively and could cross the ball. Pace and Positioning are key.

CM: Ideally, I want box to box midfielder in both roles. Naturally, the CM-D should have great defensive attributes, and the DLP should be creative. In my Monaco side, Camavinga, Tonali, Locatelli and Sandry are acing both these roles.

MR: Our main playmaker, so should be creative, technical and ideally quick too. I mainly use Zaniolo in this role.

ML: Similar to the MR, but with more focus on the on the ball skills. Pace is a bonus too, but creative dribblers are sufficient. Almada is my main man in this position.

ST: Complete Forwards, pure and simple. I want both of them hardworking, tall, strong, quick and intelligent off the ball.