Welcome to the second part of this series of articles aimed at simplifying and explaining the process of creating Football Manager tactics, using the latest instalment of the hit series, Football Manager 2021.

This second article will focus on creating a solid counter attacking style in the tactic creator.

Before getting our hands dirty, I'd like to make a distinction between playing on the counter, and quick transitions/counter attacking.

Playing on the counter generally means staying solid and safe until an opening appears that the team could exploit. If no opening appears, the team is happy to play for a draw. Speaking in the terms mentioned in the mentality article, the team employs a less risky defensive and offensive styles. These are negative styles that are commonly used by massive underdogs.

On the other hand, counter attacking (or quick transitions as I call it) is what most people look for. This style is basically drawing the opponent forward, and hitting after winning back the ball at every opportunity as they lose the ball deep in your territory. This means a balanced/aggressive defensive style, combined with an aggressive/very aggressive offensive style.

With this in mind, lets discuss the basics of a counter attacking system.

Here is an example of Forest's 1-1 draw with Real Madrid in the Champions League from my Forest save.

Eder tries to cross the ball in the 91st minute and is closed down by Cantwell (one of our ball carriers). 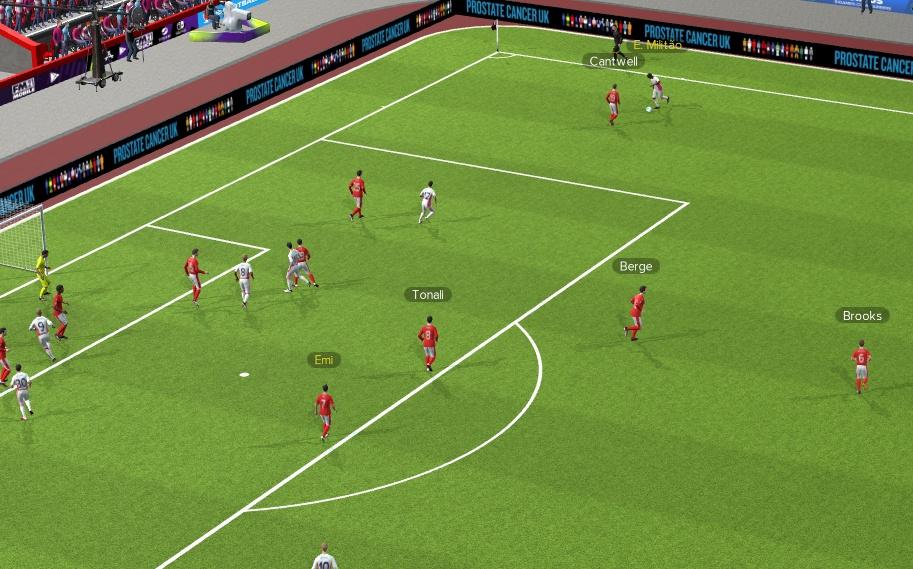 Notice how Berge (our second ball carrier) and Brooks (our offensive pivot) are taking defensive yet dangerous positions, ready to pounce on any opportunity to break. Also notice how deep are our block is.

Eder's cross is intercepted by Emi Buendia (one of the supporting players, along with Tonali), and is played towards Brooks, who occupies a massive space along with Berge. 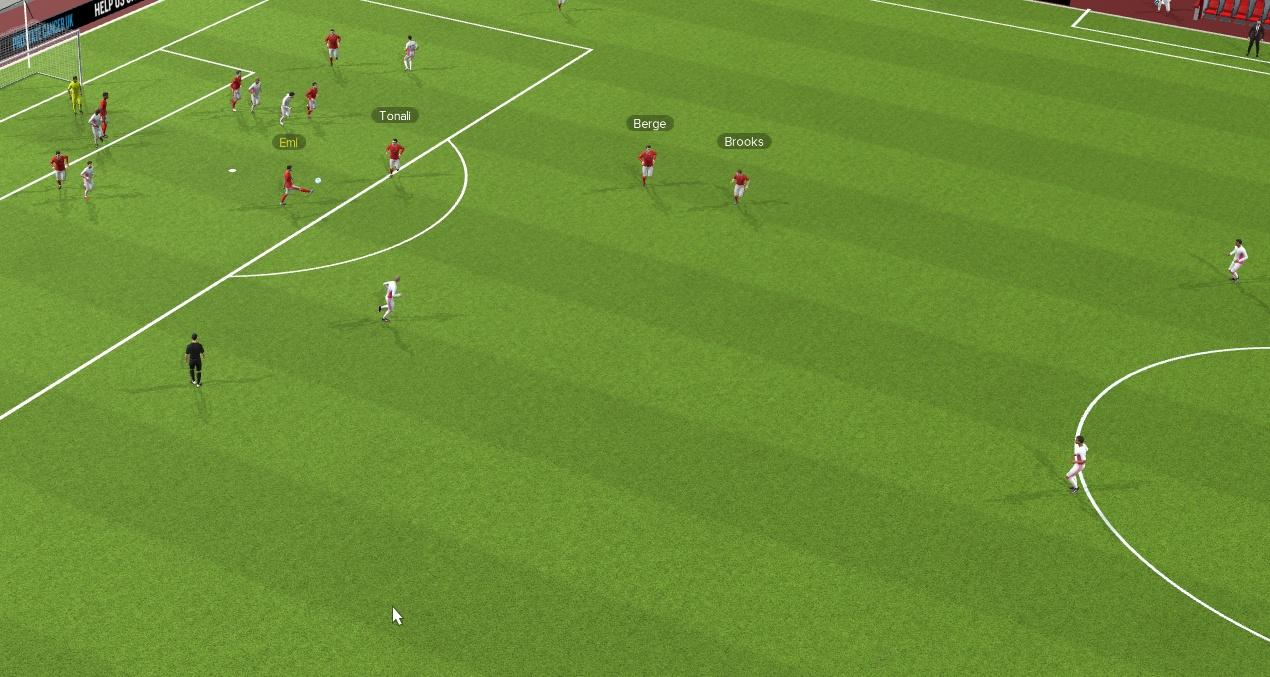 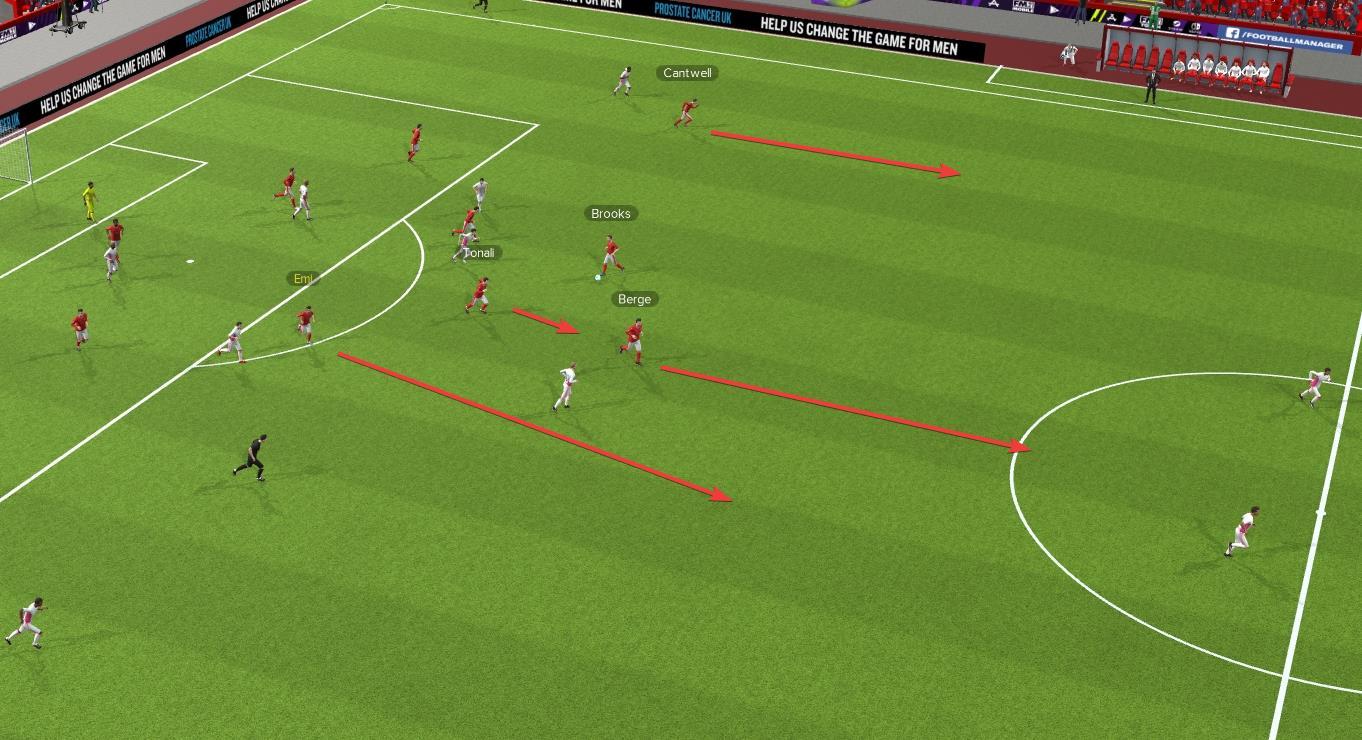 The importance of the offensive pivot is evident here. Brooks, who is very technically gifted and is quite pacey, holds the ball, allowing Berge, Emi, Cantwell and Tonali break forward in the required vertical movement, causing havoc to the retreating Real defenders. Any pass by Brooks towards any of these arrows will develop into a big opportunity for us. If he was a Poacher style forward, he'd mainly dribble his way trying to create a chance for himself. 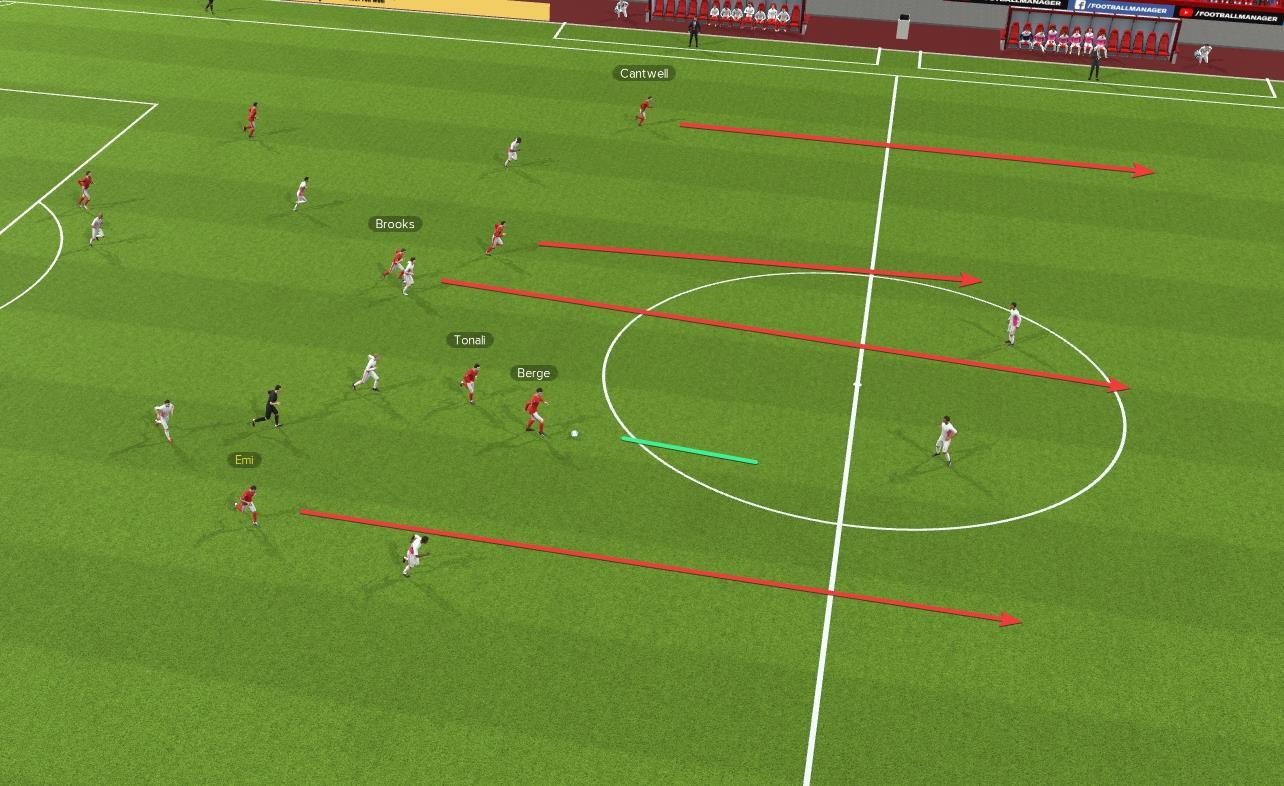 Brooks passes to Berge, who now has several options. He decides to dribble his way through the two defenders. This last shot accentuates the need of pace and flair in the breaking players. Without pace and directness, this move will fail miserably, keeping us under massive pressure.

As he dribbles, Ake (RCB) tackles him, but Tonali sends a quick lovely through ball to Berge, who shoots into the side netting instead.

We already classified the type of players required to quickly and regularly pull off a quick transitional break. These players should be included in any such style, regardless of the formation. Also, Concentration, Determination, Composure, Work Rate, Decisions, Aggression, Bravery and Tackling should be as high as possible.

Putting It All Together #

I believe that any style could be achieved using any formation. However, some formations are better than others to implement a particular style. For this particular style, it is better to pack the midfield and defensive positions in a bottom heavy formation. Therefore, 4-4-2, 4-4-1-1, 3-5-2, 4-5-1 and 4-1-4-1 are all excellent formations for this style.

I personally favour the 4-4-1-1 formation which is probably the most flexible formation in football, and will use it for this article. However, the concepts discussed here could be easily applied to any formation.

As discussed earlier, we need an aggressive offensive and defensive play styles. These are best implemented by the Positive mentality.

The unwanted behaviours set by the Positive mentality are:

These behaviours are negated by, and the style is reinforced by, the following TIs

I used to play on a deep defensive line, but I found that this makes us un-necessarily deep, allowing us to be passive in defence and blunt in attack, as we need to cover even more space while breaking.

In line with the required player types outlined above, the following roles are selected in a 4-4-1-1

This is how my counter attacking tactic currently looks. 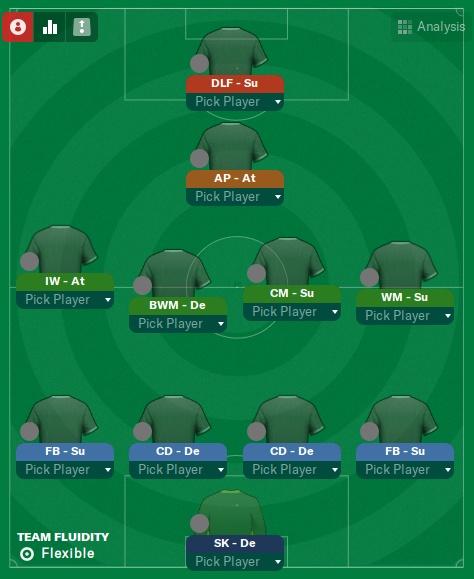 I'd like to show another great example from our recent 2-0 victory at Benfica, demonstrating one very nice move: 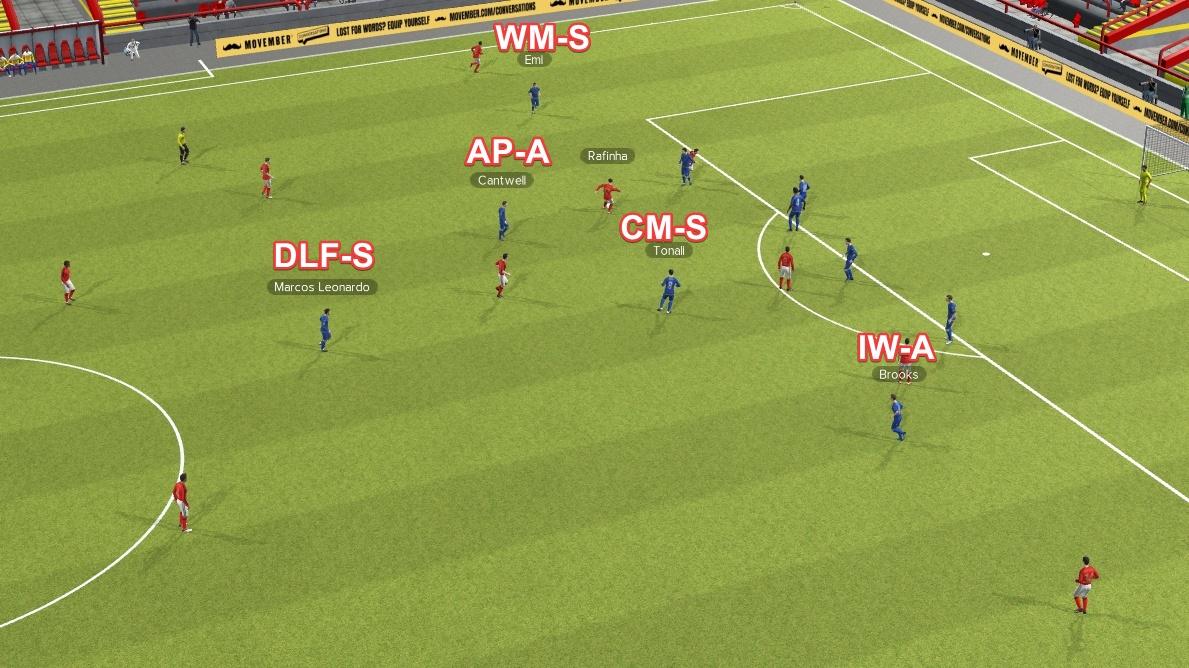 Raphinha has no space to dribble or pass, and so opts for a hopeful shot which is block by our BWM, Cook. Notice our deep positioning, and how our ball carriers are ready to break forward.

Cook's shot falls to Cantwell, who plays it quickly to our supporting mid, Tonali: 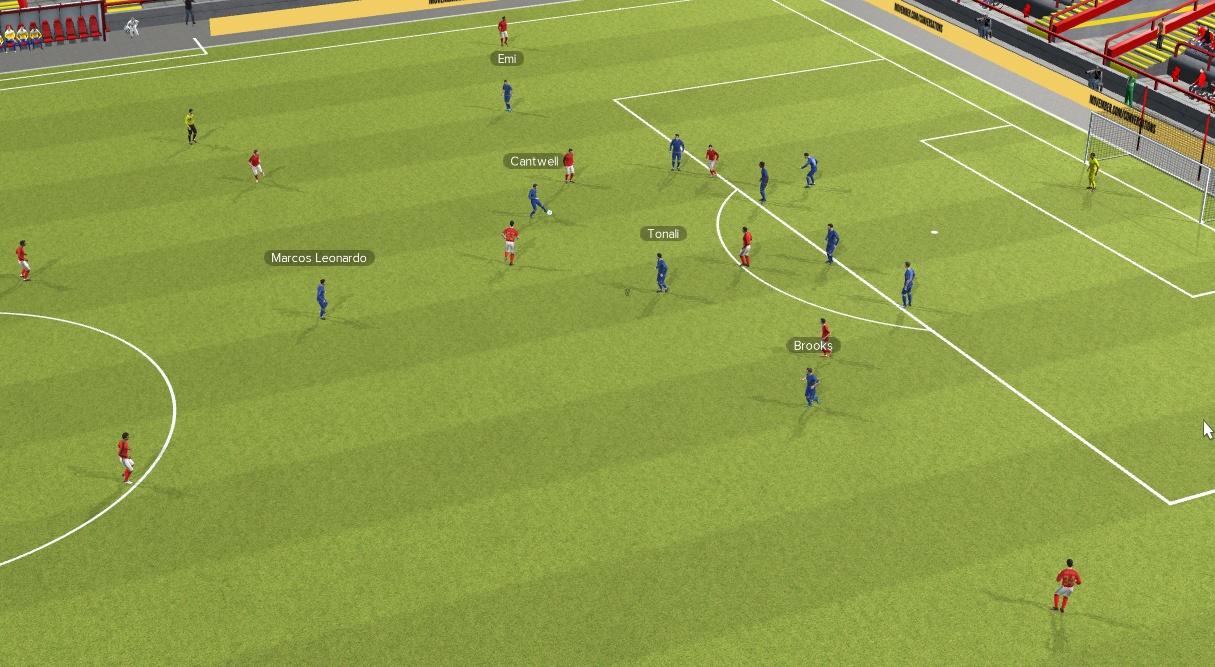 Tonali has some options already, he can dribble into space, hold the ball or pass to Marcos Leonardo, which is what he did. 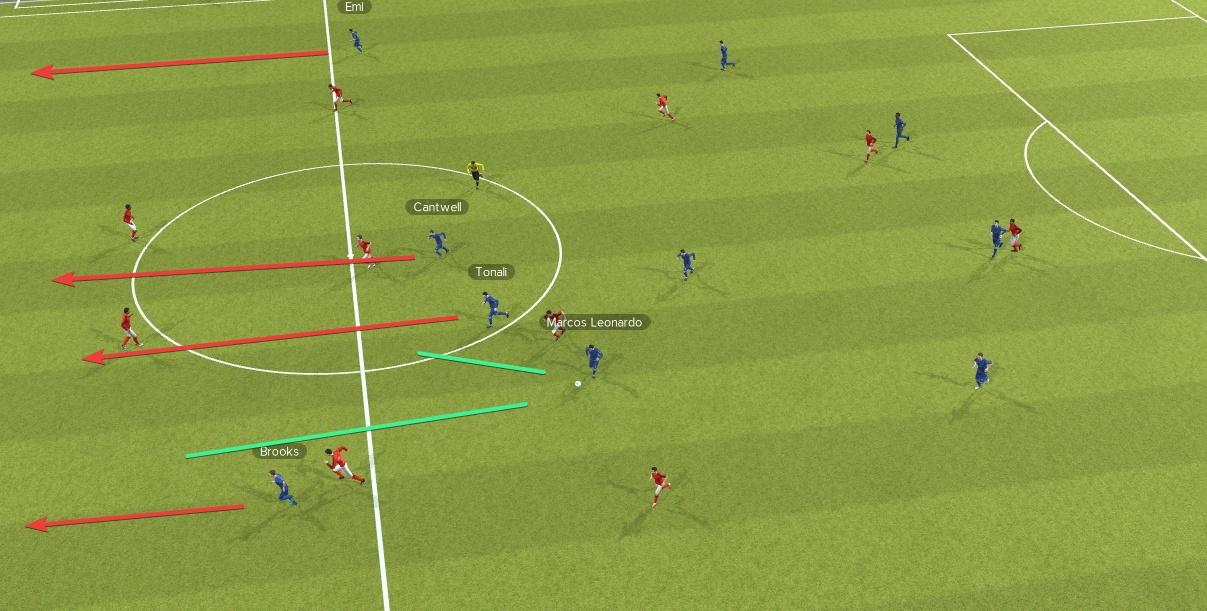 Marcos does what he does best. He holds the ball, allowing our supporting cast to get forward, breaking in my favoured parallel vertical runs, giving Marcos lots of options. Emi, our WM, is in acres in space on the far side, and so is Brooks. However, Marcos played the ball into Brook's feet rather than space causing this move to fail gradually.

This move has given me some thoughts of whether I should add a Pass into Space TI or not, and it is certainly a matter for thought. Nonetheless, it is what I look for each game, and in spite of the poor pass by Marcos, it is a very well executed break that left the opposition helpless to stop us.