Welcome to the first part of my journey to improve the Belgian League, and Standard Liege, to be one of the best in Europe.

My relation with the Forest save has been far from perfect. I have lost interest in it after five seasons, due to the vast amounts of money available after promotion from the Championship, making me spend irresponsibly to be competitive in England. This is something I do not like in the English league which make me lose interest after a few seasons in the Premier League. I prefer a more methodical and considered approach to the game, and the vast amounts of money makes me go gung-ho.

I decided I need something more challenging and rewarding, such as making an average league and club the (or one of the) dominant forces in Europe.

I have tried this challenge initially with The New Saints in the Welsh league, but was quickly overwhelmed by the very poor standards over there. I decided that the best course of action is to take an average team and league as a start, so that I may keep interest. I was split between Standard Liege in Belgium or Dynamo Zagreb in Croatia; a friend of mind swayed me towards Belgium. So, I am off to the Les Rouches in Belgium!

Simply put, my targets are quite simple for this save: Make Standard Liege and the Belgian League the best club and league in the world. It is not an easy task, but is certainly achievable, given a few seasons of consistent success.

The harder part will be pulling the rest of the team with us. They need money and quality players to be competitive in Europe, and therefore provide more traction in making the Jupiler Pro League the best in the world.

We are already the 8th best league in Europe, behind the giant English, Spanish, German and Italian leagues, and behind the French, Portuguese and Russian leagues.

It shouldn't be too hard taking over the Russian and the Portuguese leagues, and probably the French too, since Ligue 1 is mainly affected by PSG. If we could make good runs in all three Euro competitions we could be fifth quickly.

Breaking into the top four is, however, a completely different beast.

Standard Liege starts in the Europa League Second Qualifying Round. Club Brugge is the club competing in the Champions League.

My approach is largely unchanged from my Forest save, relying on a medium and deep blocks, exploiting quick transitions.

My first actions were to improve my Assistant Manager, Director of Football and Technical Director, as they take care of a lot of business and improving them will help us immensely.

Thereafter, I oversaw an mass exodus of deadwood at the club, while recruiting 4 players that should form the core of what we want to achieve:

Our initial run has been no short of exemplary. So far, we won 12 games out of 12, scoring 32, conceding just 3 goals! 3 of these wins came in the qualifying rounds of the Europa Leauge against Finnish side Inter Turku, Swiss side Servette and Russian side Rostov.

We were drawn into a tough Europa league group besides Bayer Leverkusen, Krasondar and Wolfsberger. I'd be disappointed if we don't qualify from that group in all honesty. 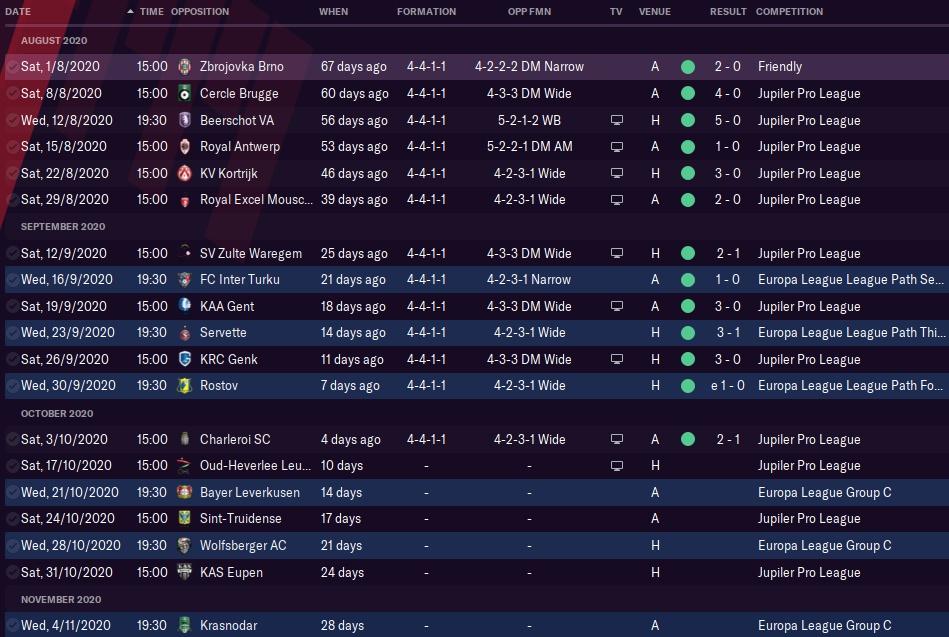 The team has learnt my style quickly and been showing perfect quick transitions regularly:

However, so far, we had little resistance, both in the league and in Europe. The true test lies further ahead, when we face Bayer and Krasondar.