Season 2 would turn out be great for Les Rouches, on all fronts. Once again we managed to run away with the league, with no stiff resistance, and naturally the Croky Cup two, seeing us do a double for two years running.

We started our campaign with a brilliant display, with Arezo scoring 4 goals against Gent, while showing incredible defensive displays:

The league was still # 8 in Europe, although the prize money is increased slightly from around 490K to 520K. Standard Liege is also the best club in Belgium, quickly clearing our debts and seeing our club value soar to 750M, comfortably leading second best, Club Brugge, which are valued at 422M.

From the next season, I will try to focus on the other teams, buying average players from them for more money, while giving them good players cheap in order to offer more traction to the league.

The Champions league wasn't an easy ride though, seeing us in a brutal group with Man City and Bayern Munchen.

We naturally lost against these two giants, but we managed two wins against them in the reverse fixtures. A Man City (the eventual champions) double over Bayern saw us qualify second in a tough group. We would go to be knocked out in the next round by Napoli.

Arezo in particular is a revelation, leading the attack superbly, although he tends to disappear in many games. He ends the season as our top scorer, while him, Bolingoli, and Xadas the best players in the league: 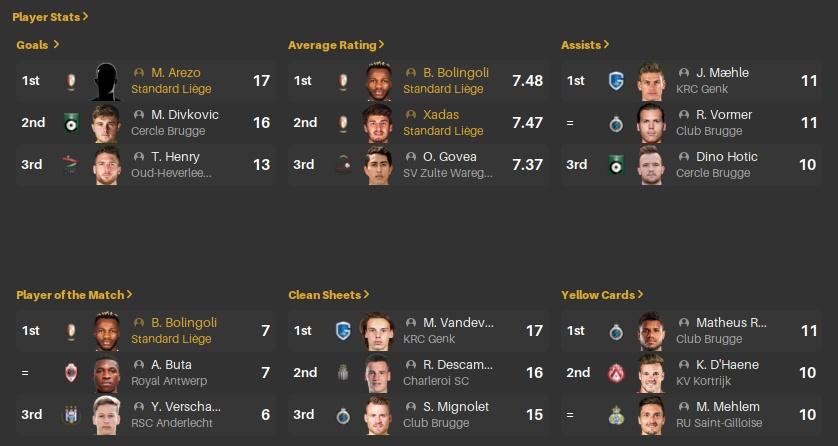 Season 3 would start superbly, but with several issues in attack and defence, especially after Man Utd activated the release clause of our elite CB Anel Ahmedhodzic to snap him for 30M (brought for 7.5M). We'll see how we would navigate a difficult year with the big guns homing around our best players.

It was this sale of Ahmedhodzic that saw me take a Moneyball approach to transfers. For the second season running, bigger clubs pick up my best players - Amallah, Ahmedhodzic, Vanhausden. While I have no qualms with this, I need to make sure we aren't affected by this bi-annual raid.

Therefore, I will be looking to hoard high potential kids in all positions, loaning them out to ideally other Belgian teams to help them, while either selling them for profit later on, or having a next in line player once the first team player gets sold, injured or hits a poor run of form.

Things are getting interesting for me...