We managed to win an incredible quadrauple; the Supercup, the Jupiler Pro League, the Croky Cup, and the F**KING CHAMPIONS LEAGUE.

Yes you read that right: THE. CHAMPIONS. LEAGUE. 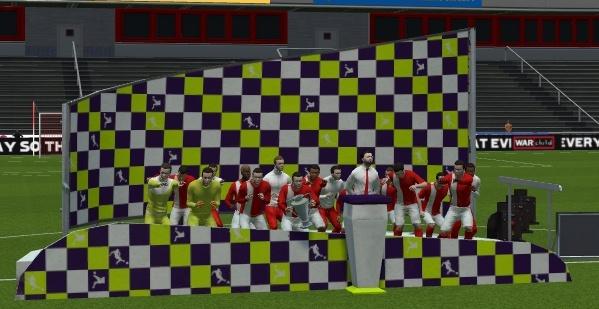 Our domestic season was normal (by our standards), running away with the league for the third successive season, scoring for fun, and conceding 11 goals in the process. However, we aren't yet able to manage an unbeaten season. 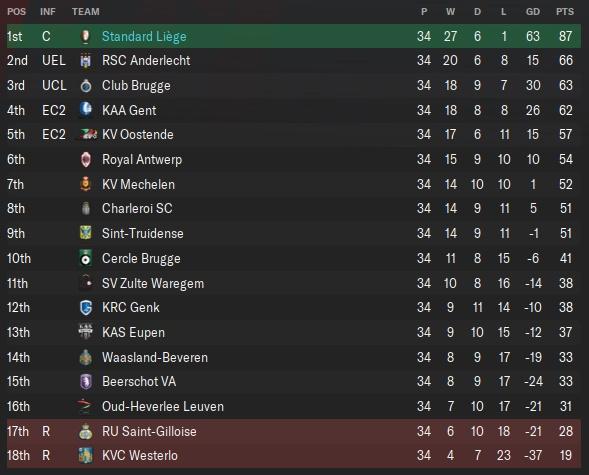 We were almost beaten in the Croky Cup final, against KRC Genk, as we find ourselves at 2-0 down by the 66th minute. Brenner had another say and scored twice in quick succession to lead us to a late comeback and see us go to the penalties, which we won, 4-2.

On the European front, we had an average Champions League group, with Barcelona our only top opposition along with Dynamo Kyiv and Austria Wein. We qualified second from the group stage, after managing a draw and a win against all three opponents.

We had a relatively favourable draw against Lazio, beating them 3-2 on aggregate, seeing out the tie after a rampant 3-1 demolition of Lazio at home.

Our defence was in top form against the next opposition, Man City, as we scored an away goal to ensure an away goal victory against them, after a boring (and honestly, great) Mourinho-esque 0-0 draw at home.

The same happened against Man Utd, and former player Ahmedhodzic, getting through by virtue of this away goal win, following a drab 1-1 draw, to set up a final against Ajax:

We were very lucky to get to the final with all the six draws we managed throughout our CL campaign. We were also lucky as Ajax managed to get the likes of Porto, PSG and Real Madrid out of our way, setting us up against a much similar opponent.

I was incredibly nervous during the final, so much that I set up the team to play more direct to exploit the spaces behind Ajax's, quick and high pressing attack, instead of relying on our more considered approach. 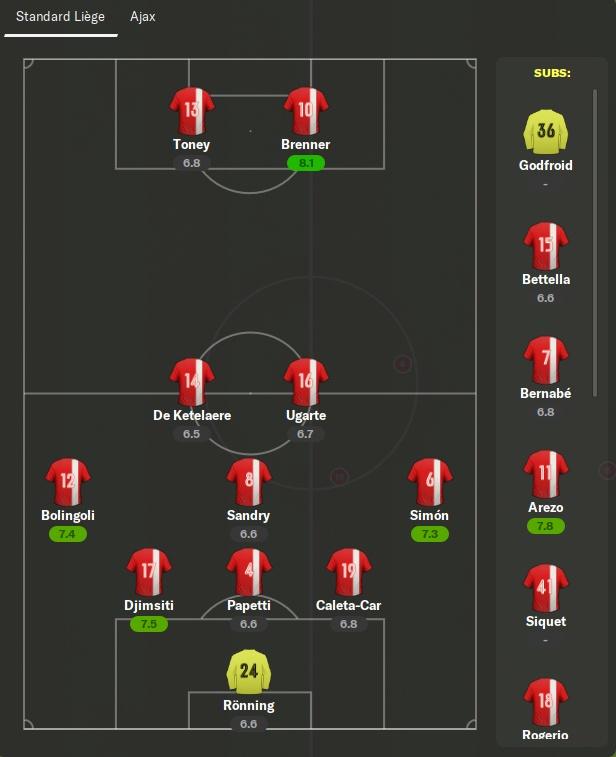 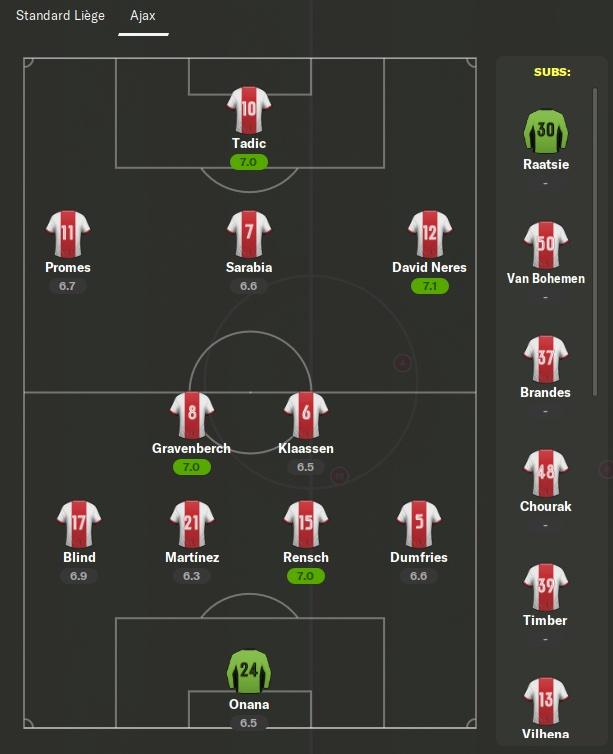 We were trailing by the 28th minute, but once again Brenner scored twice quickly to mount a comeback and make it 2-1 up. Promes equalized soon thereafter. A spell of dominance by Ajax made me substitute our target man, Ivan Toney, with another quick forward besides Brenner, Arezo.

The idea was to rely on quick direct through balls from the midfield to Brenner and Arezo, a plan which managed to get us a third goal:

Our backline managed to weather the final storm to see us win a 3-2 (a second!) comeback victory and get us the title on our first ever CL appearance! 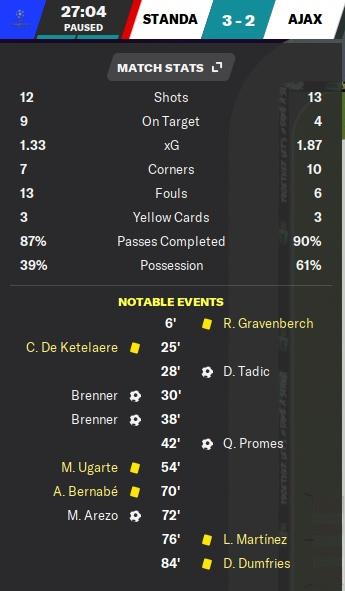 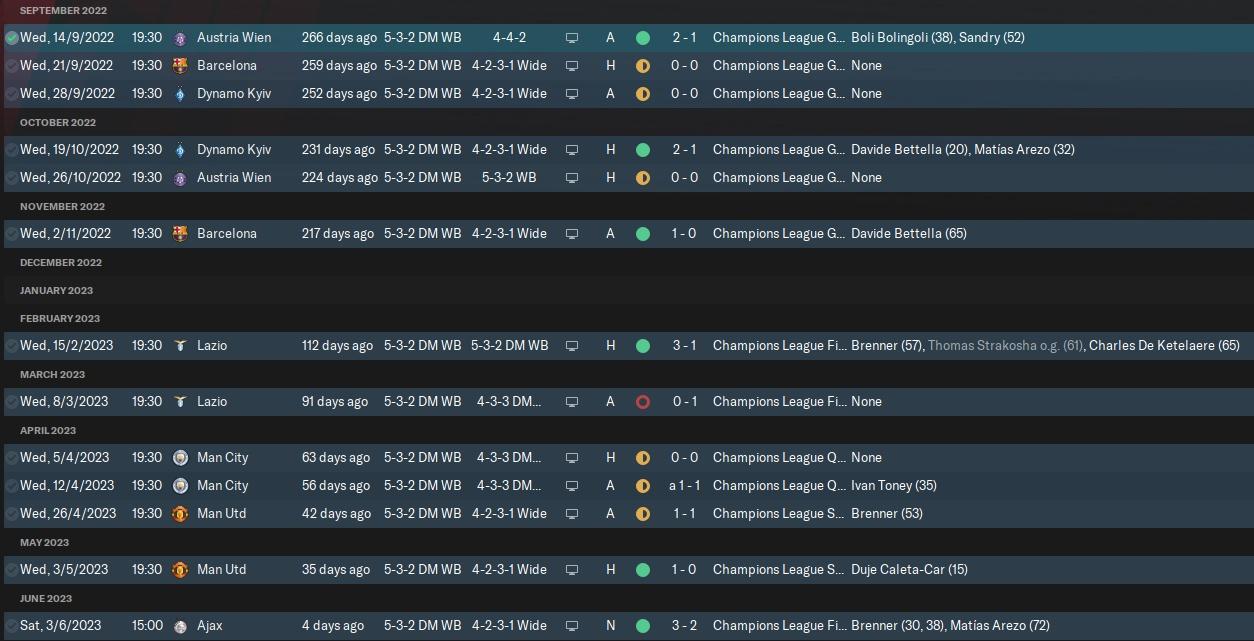 Following our CL triumph, the board started to expand our ground and improve our already incredible training facilities.

I have taken the moneyball approach by the end of the last season, and it has manifested very well during this season. A prime example is Thiago Almada, brought in for 8M in the second season. He had a wonderful second and third seasons, before grabbing the attention of the top clubs.

I had anticipated this and already signed a couple of potential replacements, that would step in should Almada is sold.

His 37M release clause was triggered by Bayern, Liverpool and Inter, going to Inter, while our production line is still healthy:

Schrijvers was snapped on a free transfer as a potential homegrown backup, but was sold by the end of the season for 3.6M

De Ketelaere was brought for an expensive 30M from Club Brugge (in part to give them some money) and has been incredible both as our playmaker and as the transitional player.

Samoise was brought for 14.5M from KAA Gent, and is doing a very great job when needed.

Finally our biggest playmaker prospect is also a Belgian, bought from KV Mechelen during the same second season, and is developing nicely so far

With this kind of depth, I am not really worried about losing any player, as I already lots of replacements lined up.

After the sale of Almada in the winter window, and several other midfield players in the off season following our CL victory, I replaced them with Zaniolo and Riqui Puig. Puig is intended to be a player sold for profit later on, as he is recruited for only 7.5M.

Elite attacking midfielder, Zaniolo, on the other hand was offered to me by Roma, and I simply couldn't say no to this chance to have such a creative force in the team.

By the end of Season 3, for the first time since as far as my memory stretches, I have been very satisfied about how I approach things, especially in terms of tactics and transfer.

My tactics has been the same since I started the transition to 3-5-2 by the end of the first season, and I have managed to use the exact same formation for all games during this period, with very little change to some TIs depending on the opposition.

This is one aspect I always wanted to do, but fail either due to personal anxieties and perfectionism, or due to the tactic being actually flawed. This time, using a neutral 5-1-2-2 (5-3-2 DM) formation, coupled with my quick transition approach, I seem to have hit a sweet spot between all of my very high standards without much compromise.