Author's note: I apologize about this late update. I was losing interest in this save, and had to put it on hold for a while, until I'd feel ready to complete. This is a short update of where we stand at the end of season 3 and the start of season 4.

We managed to steer through the difficult end of Season 3 with minimal damage. We were easily knocked out from the Europa League 2nd knockout round by Lazio, and then played most of the big boys in quick succession. We managed to get some decent results, yet losing again against both Manchester clubs, a result which is getting to my nerves.

I am already fed up by our joke of defenders, and decided that we will make a complete overhaul of the backline during the next transfer window.

A miraculous 3-1 against Liverpool in a midst of a 4 game winning run ensured we get Champions league football the next season, and banking a very lucrative 66M transfer budget.

I let go of all deadwood, and replaced (almost) the entire back line. I made a grave error of wanting to play a 5-4-1, not realizing that it is a non-sustainable model of playing. This led to us getting more central defenders than what we need.

We bought in Adarabioyo as our van Dijk in defence, along with Mepham, Tomiyasu, Wober, Varnier, Salcedo, Soteldo, Lovato, Ugarte and a high potential wonderkid Reyes, who is on loan at Leicester.

Once again, I oversaw an exodus and massive change in the squad. However, given that I returned to my 4 at the back formation, the lowest performers of these defenders will surely depart at the end of the season.

We started Season 4 brightly, despite another defeat against Man Utd, using a mixture of 5-4-1 and 4-4-1-1, before finally deciding I will rely on my favourite 4-4-1-1, and not be quite anxious about the formation once again. 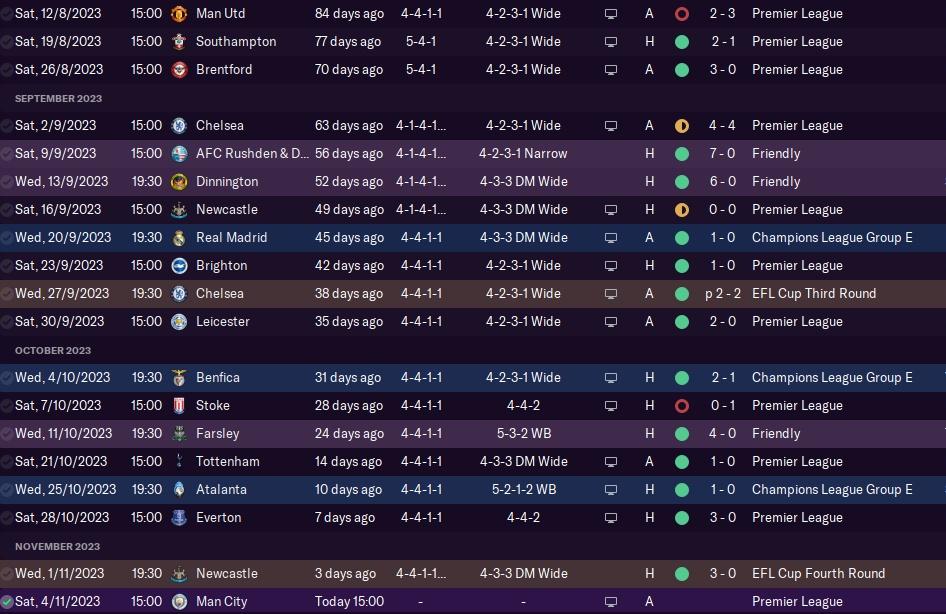 So far, am pleased with the team performances, especially at the back. I can't remember conceding 4 in a single game before, but that Chelsea game was a complete mess. Everyone was happy we weren't beat, but I was furious that we let in 4 goals!

I should now be able to focus on being competitive and look to develop youth players, the department I have shamefully neglected to focus on building a solid Premier League team first.