After finally getting through the difficult period of December and January unscathed, without further cup commitments, I was confident we'd navigate easily through the final months of the league.

Little did I know that the worst is yet to come.

We started with an abysmal defeat against overachieving Wycombe. Our performance was appalling, defending poorly and not taking our chances. 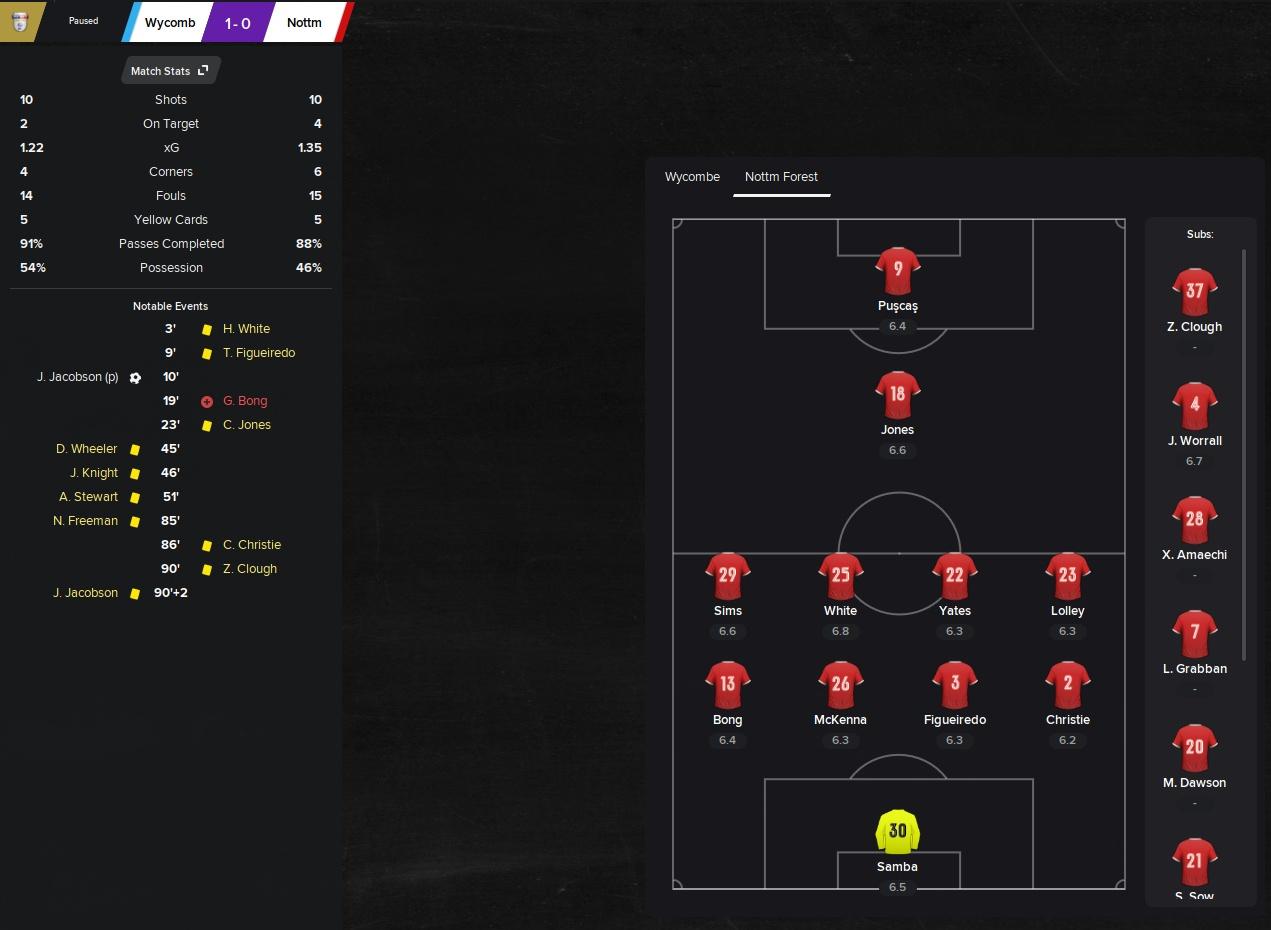 The team was heavily fined after this performance, but my anger during team talks started to affect morale, endangering all the good work we have done throughout the season.

Next was a game against promotion rivals Bournemouth, and I feared the worst. Bournemouth are one of the top scorers in the league and based on our performances against Wycombe, we should be easily beaten.

The team proved me wrong, and played magnificently, doing everything right in the game -and scoring this great counter-, to keep us top:

Celebrations were cut short, however, as we were well beaten the next game by Swansea, continuing the worrying trend of inconsistent performances and reckless penalties conceded. 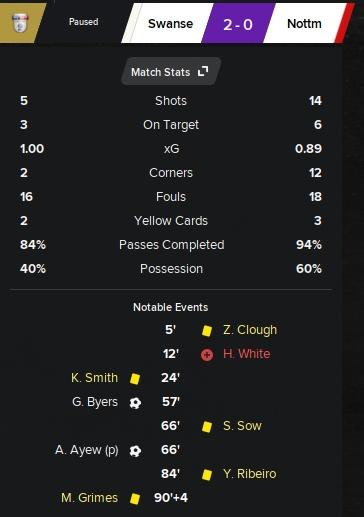 We destroyed 10 man Blackburn the game after, which was good for morale: 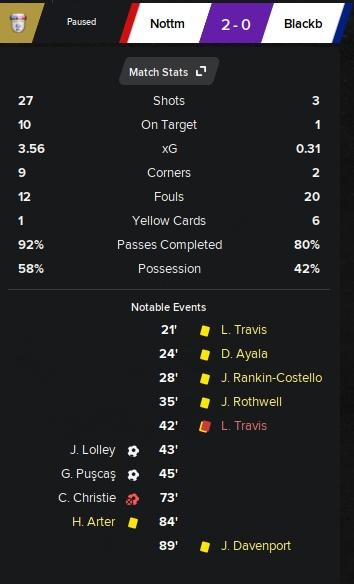 Once again we follow a great performance with a very poor one, allowing ourselves to be stunned by bottom-most Rotherham: 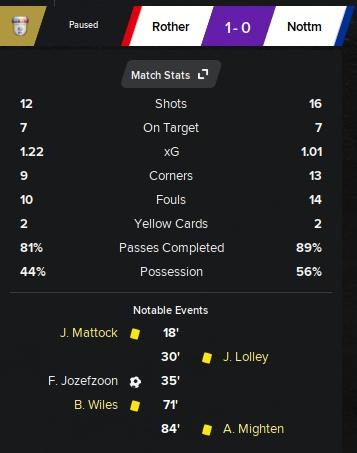 The team was passing like amateurs, no teamwork, no taking chances, no proper movement. Critically, the midfielders and the wide players lose the ball too often, playing like under huge pressure.

Combine this with our deep block, it can be very easy to remain under extended pressure:

This concludes our worst month so far:

We lost our points advantage at the top of the league, which would have been nice retain as we play our rivals, Watford, Norwich and Brentford in March: 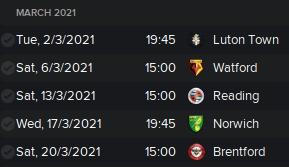 There was nothing much of note during March, as we managed a 5-2 victory over Luton, a match which saw our defensive issues remain, like allowing a free header between three defenders:

But at this point, I was only concerned about results, we scored 3 more than them which is more than enough in this moment.

We managed to play out a drab goalless Mourinho-esque draw against Watford, and a 1-1 draw vs Reading, before rallying and easily dispatching Norwich with a fully deserved victory, providing a case for us winning the title: 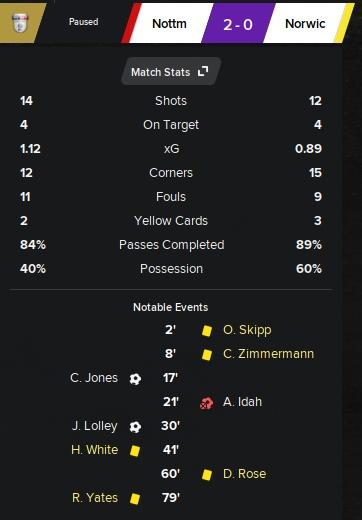 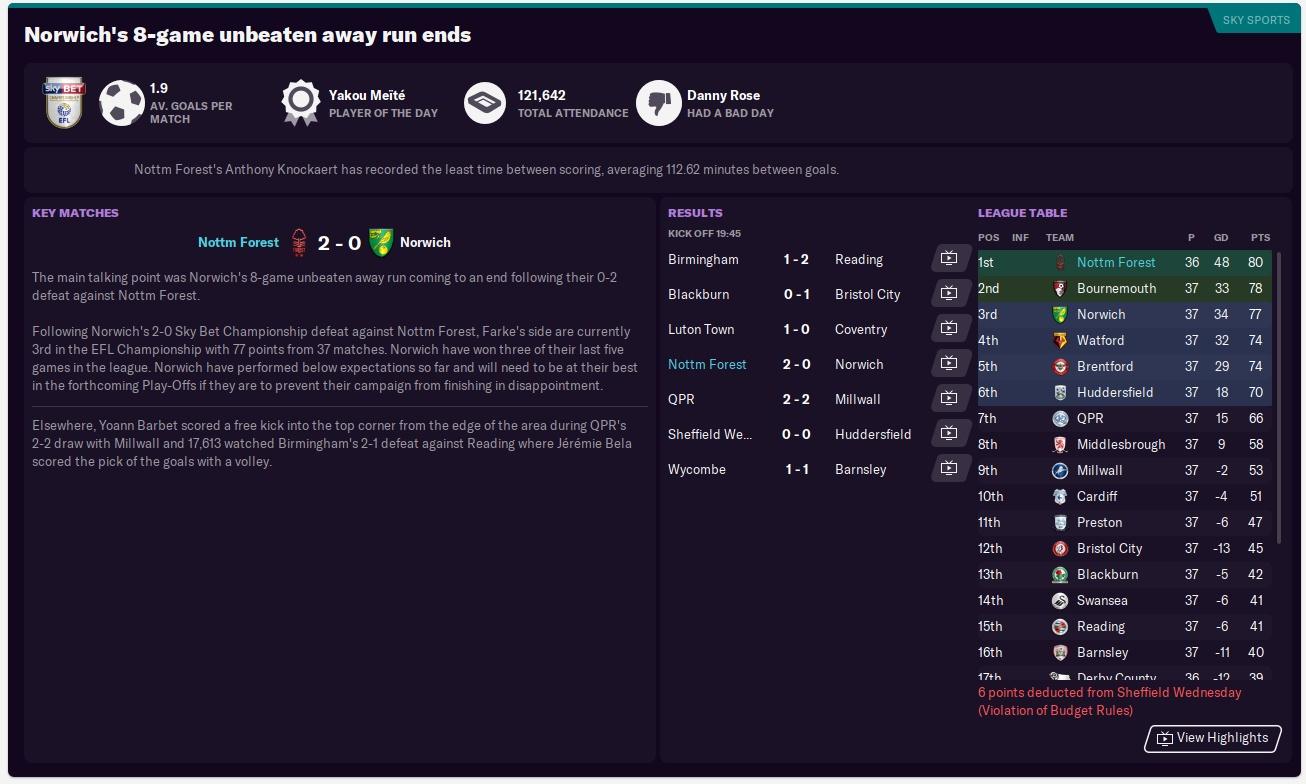 Disappointment came against Brentford though, as we were undeservedly 2-1 up, in a very poor performance. Despite our poor defence and general form, we scored a wonderful team goal:

Before conceding a last minute equalizer: 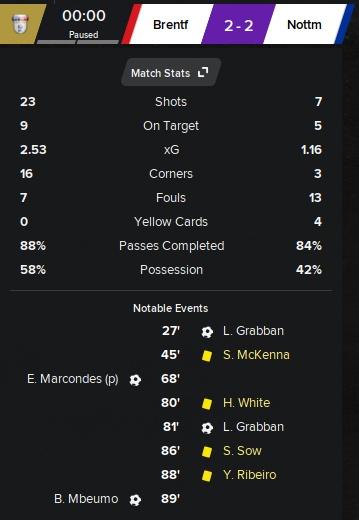 A pass completion of 84% is completely unacceptable and we deserved to not get full points from this game.

This ended an average month, as we concede 5 in 5, with no real star performer ...

So I far, I did try to remain true to my style and rely on personnel or simple role changes in attack. This wasn't enough though.

I decided to try explore other remedies.

Firstly, during the break between March and April, we played a couple of minnows in friendlies, which we steamrolled 5-0 and 7-0, boosting our morale and increasing team cohesion.

Thirdly, and most importantly, I started to speak individually with each under and over performing players. I believe this had the most impact, as they promise to improve to have their morale boosted after a praise for good performances.

The additional training sessions was added after QPR's game:

This had great results, as we seem to get back our swagger and play with our pre-winter form and propelled us, finally, into a winning streak during April; one that we did not have for two months. We also regained an 8 point margin behind second placed Bournemouth: 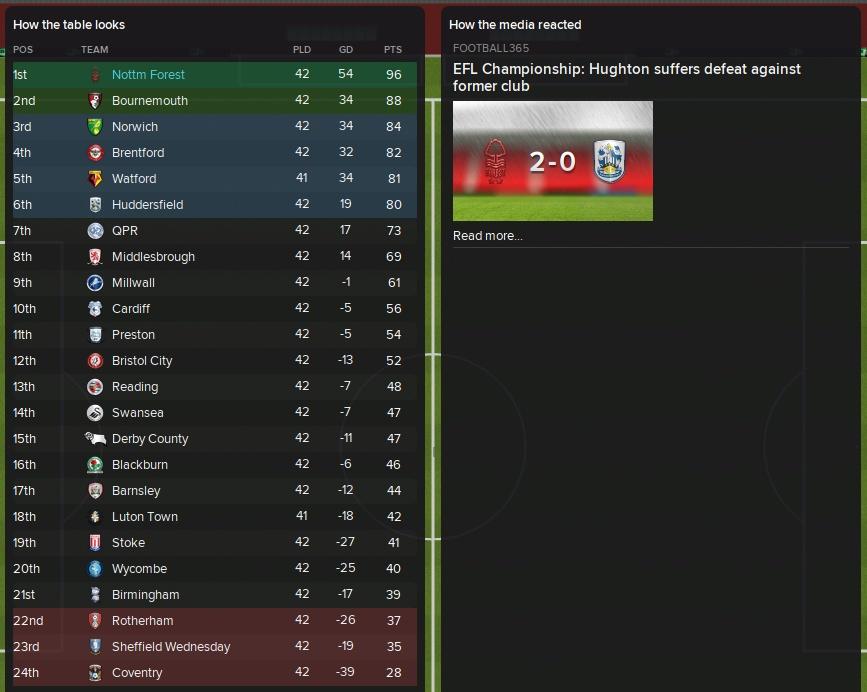 That last game against 6th placed Huddersfield, managed by Forest's previous manager, Chris Hughton; was a joy to behold. We had total domination in all aspects of play: 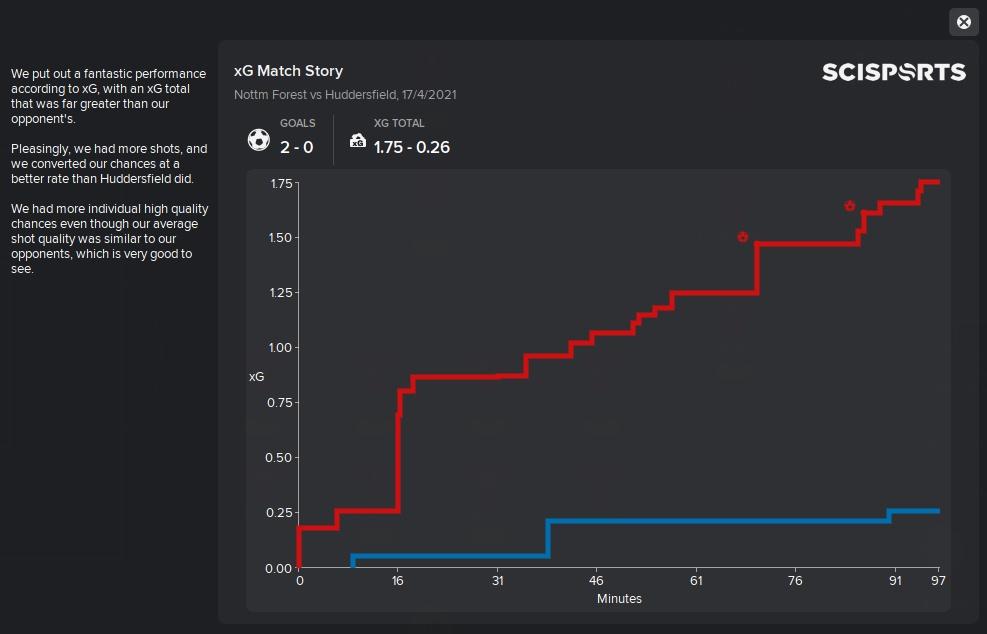 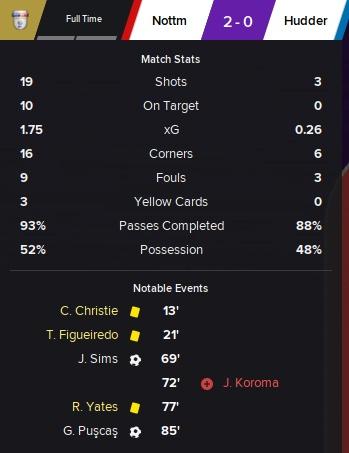 and someone was bitter in the aftermath:

As we were in the midst of our gruelling run, some great work was happening in the academy. Our U18s, who top the Development league, drew with a high potential trialist team, which included some great prospects, with a curiously high number of high potential Irish players: 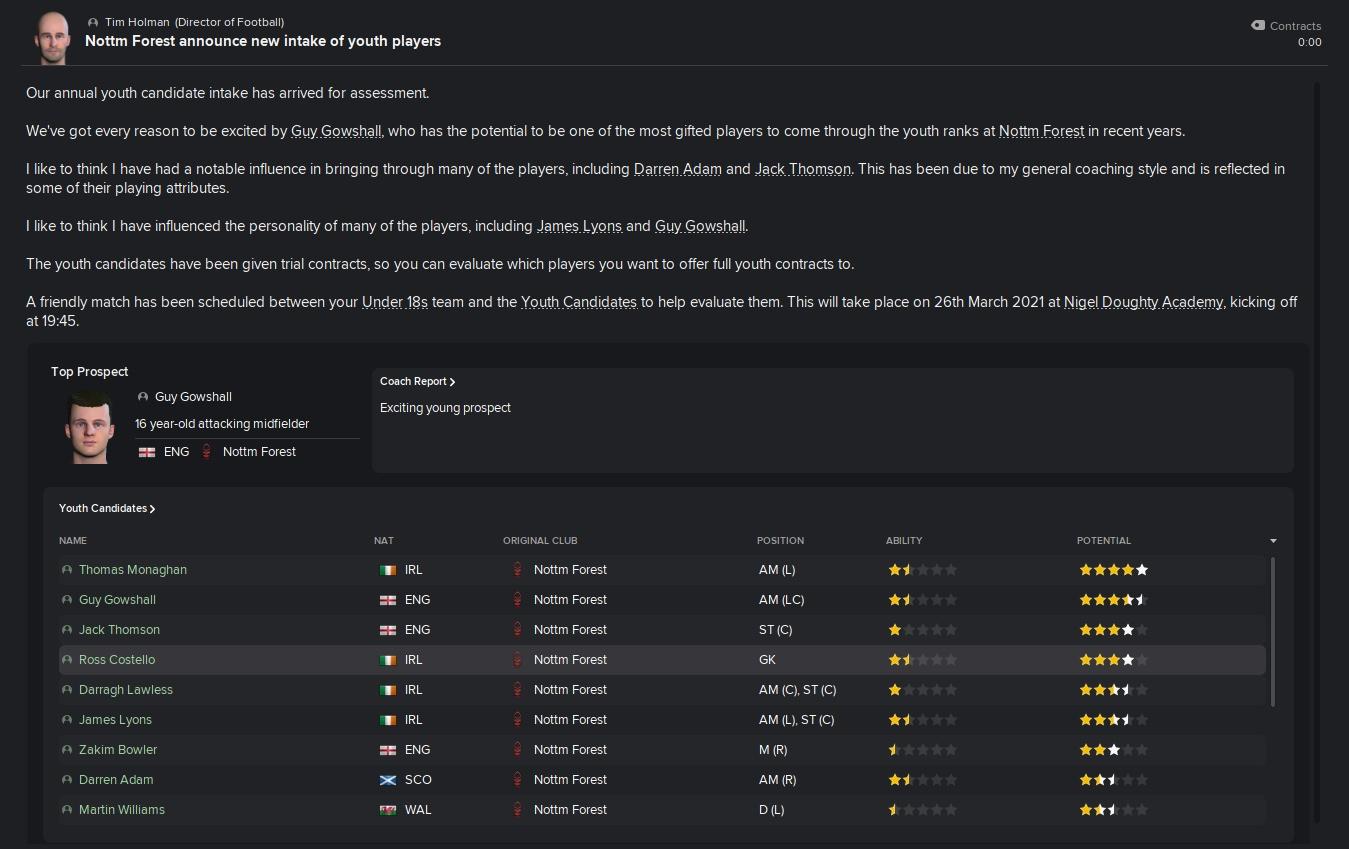 Although all of these kids can't get into the first team anytime soon, their potential makes them a great asset to either making us some funds, or saving us some on transfers. I am particularly excited about Monaghan, Costello, Lyons and Gowshall.

He carries a lot of affection for a particular manager!

Meanwhile, I have been working on a rudimentary spreadsheet to determine the attributes of the players required in the Premier league. Quite simply, I extracted the top 150 Premier League players by average rating, and exported their entire attribute set, and classified them by their general type.

For example Naby Keita and De Bruyne are "Creative Mids", Henderson and Kante are "Hardworking Mids" and so on.

Next I averaged their attributes and highlighted the ones that are 13 or above. These are the ideal attributes that I should look for in a similar type of player.

Of these, the following are 15 or more:

Which is not a surprising find. You need strong, quick, fit, determined and intelligent footballers that work well in a team to succeed. The real challenge here is deciding which attributes I could neglect while looking for players for us.

At any case, we have got promotion deciders first to take care of...